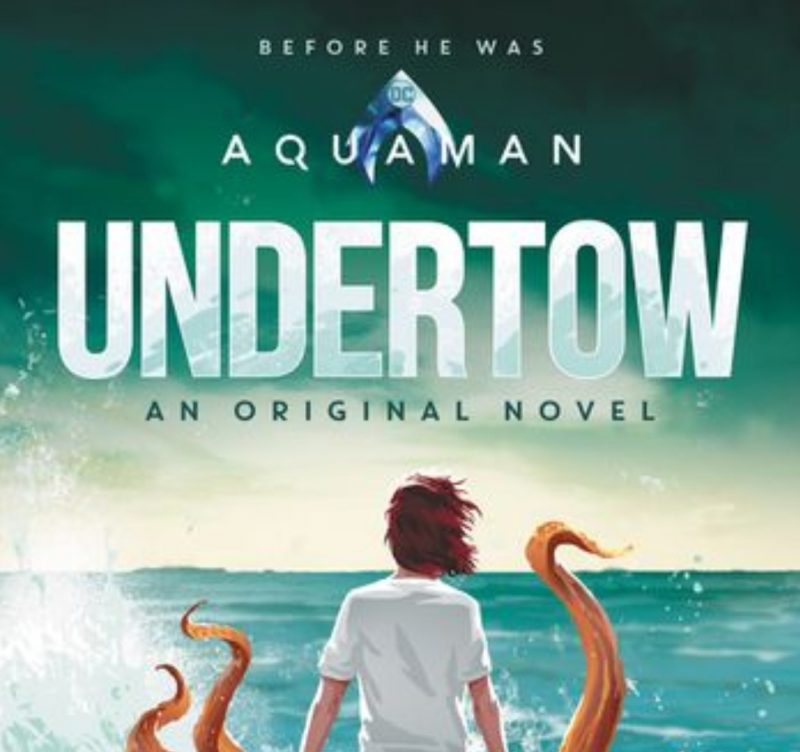 Aquaman: Undertow is the never-before-seen prequel story of a young Arthur Curry, set in the cinematic world of Aquaman and the DC Universe–perfect for fans of the highly anticipated movie!

Before he became known as the Aquaman he was simply Arthur Curry. Undertow gives us a story of Arthur between the ages of 6 and 13, growing up in Amnesty Bay with his human Father Tom Curry.

This is a story not just about a young boy discovering his powers, it’s about the day to day struggles growing up without a mother and being labelled different. His center of morality comes from his father Tom, who is constantly bombarded with questions from Arthur about his mother and why she isn’t around. I really felt for Tom who has to raise a child on his own which is hard enough but knowing that his mother is from another world that nobody would believe, that can’t be easy. Tom is constantly worrying about when or how to tell his child the truth that when said out loud sounds like a fairy tale.

Something I found very surprising about this book is that a part of the story I have actually seen in the Aquaman trailer. In the trailer we see a scene when young Arthur appears to be on a school trip at an aquarium. I don’t know how much of this will make the movies final cut but the book gives us a full account of that trip and the events which lead up to its climatic scene of a shark bashing the glass.

Arthur’s father is a good man and you can tell why the Queen of Atlantis would fall in love with him. We learn that Arthur gets his sense of humor from his father so It will be interesting to see if that is displayed in the movie. Arthur desperately misses his mother and blames her for not being around, again it will be interesting to see that relationship on screen between Jason Momoa and Nicole Kidman.

This is a non-spoiler review because I think the book will have more impact to the reader if you don’t know what’s going to happen. What I will say about the story is we meet an ordinary boy dealing with bullies at school, not fitting in with class mates, who learns he can do incredible things in the water and has the courage to become a great hero.

At 220 pages this isn’t a big read with no profanity or adult related content and certainly would appeal to all ages. The story is fluid, well written and has a few genuine pager turner moments. I’m very intrigued to see how much more of the book will be referenced in the Movie but being an official prequal I would highly recommend reading this if you plan to see the movie.

Thanks to the good people at Harper Collins Publishing, DC World have been given an exclusive preview for our readers. Below is an extract from the book and it is the opening prologue. I hope you enjoy the taster.

I also got the amazing opportunity to be able to speak with the Author Steve Behling about the book and his work. Below is what we discussed.

My editors at HarperCollins, Tomas Palacios and Rose Pleuler, came to me with the idea of telling the story of Arthur Curry’s childhood. So this was something that they had been developing during initial conversations with Warner Bros. As I understand it, the filmmakers were interested in exploring Arthur’s life prior to the events of Aquaman, before he met Wonder Woman, Superman, and Batman, and joined the Justice League.

The school trip is a great moment that originated in the screenplay, and we chose to explore it in the prequel novel with the filmmakers’ blessing. It’s a big moment for Arthur, and he’s dealing with a lot of different feelings. So we tried to build on that in our novel, and give the reader some insight into what was going on in Arthur’s head.

It was a whole bunch of things! I’ve loved comics since I was a kid — that’s how I learned to read. I grew up with a real affinity for comics, especially the super heroes of DC and Marvel. I was big into the Super Friends animated series, and I can vividly remember my dad giving me my first Aquaman action figure (it was a rainy Saturday in Rhode Island, we had to drive to his office to get it, and I played all the way home). So that disposition has always been there. But what attracted me to this project specifically was the opportunity to explore aspects of childhood that many of us experience — the feeling of being different, the feeling of being alone, that no one understands you. I think those are very universal emotions, and if we could somehow communicate a small portion of that in our book, then we did our job.

I’m also a big fan of Ramona Fradon, who has done so much amazing work in comics. She’s the quintessential Aquaman artist, to my mind. So I wanted to tap into my love and appreciation for her  work, and bring some of that to the storytelling. Plus, Fradon created Topo the octopus, a character who I couldn’t wait to bring into this particular Aquaman story.

I haven’t been involved with the making of the film, only this particular novel. And when you work on a project of this sort, you sign an NDA (non-disclosure agreement), which means you won’t reveal any details. So I just assume I can’t say anything, and that makes life easier for everybody!

I had so much fun working on Undertow, I’d jump at any opportunity to play in the DC universe again! Some of my all-time favorites are Shazam, Mister Miracle, the Question, Challengers of the Unknown, Sgt. Rock, and the Unknown Soldier. And I am a complete pushover for the Creature Commandos because, monsters.

I have a number of projects coming out in 2019, including Shazam! Freddy’s Guide to Super Hero-ing (also from HarperCollins), which ties into the upcoming Shazam! Film. It’s a really fun book that my editor Alexandra West came up with — it gives the reader a sneak peek into Freddy Freeman’s journal, talks about his love of super heroes, how he helps Shazam discover his super powers, and what it means to be a hero. I’m also one of the writers on IDW’s ongoing DuckTales comic series, and I also have a couple of novels featuring some marvelous, avenging characters (hint, hint) that are on the way as well.

I would personally like to thanks Steve Behling for his time and giving us a deeper look at the book. Also Harper Collins publisher for access to the book and the exclusive extract above, not to mention the free copy we gave away earlier in the month.  Feel free to let me know your thoughts on twitter