Review: Aquaman: War for the Throne 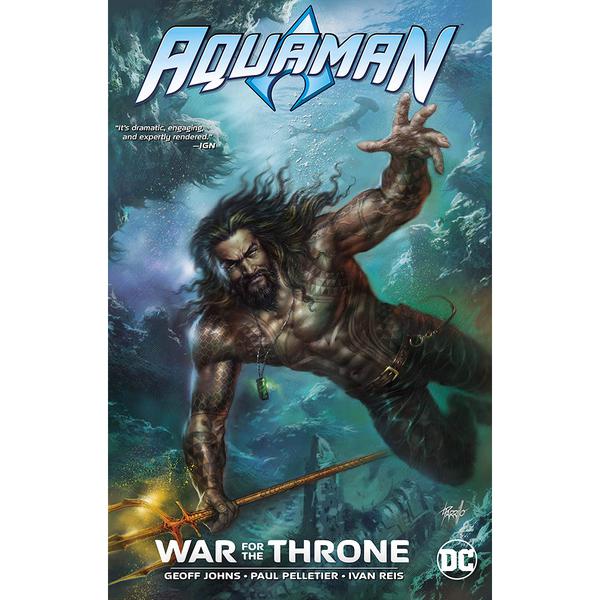 Jason Mamoa splashed onto screens across the country as Aquaman a few short days ago. DC have been gearing up for this release ever since Justice League dropped in 2017. The people inside DC comics had the great idea to tie the release back to its roots: the comics. This book collects the origin story of Aquaman written by Geoff Johns, and a Justice League crossover into this book. It’s a gem of a collection, and its relevance to all parts of the DC fanbase is what makes it so strong.

The book collects a few key moments from across the New 52 (a reboot of the DC Universe, and an invigoration of every character). It combines issues of Aquaman’s own run (Issue 0, 14, 15, and 16), and Justice League (issue 15, 16, and 17). These spots in his past, in the New 52, really shows his beginnings, then it shows his early involvement with the Justice League after leaving Atlantis.

It’s a little strange that they chose to include these issues in particular. There are many jumps in time; from him learning who he is and making his journey, to fighting strange creatures of the deep, to the end of the book, where his journey takes a different direction. This might be a little disconcerting. For a new reader, this might be their only ‘in’ for Aquaman before the movie, and it’s not the clearest door to go through.

The book, though not without a few foibles, is a good pickup for anyone. An established comics reader like me loved the refresher on his origins. A brand new fan would be very eager to learn all they can going into theatres this week, and this is the best way for that; especially if you pair it with DC Spotlight #5 (an Aquaman special from Titan Magazines which is available in most branches of W.H. Smiths right now!). This lovely comic retails at just £4.99 and collects the first four issues of the same run as those featured in the graphic novel. It show’s Aquaman’s first meeting and battle with the aforementioned creatures of the deep.

Most importanly Aquaman, War for the Throne contains bold action and beautiful, colourful artwork that will draw many young readers in, hoepully making them lifelong comics fans in the process. This trade paperback graphic novel is a worthwhile, fun read for just about everyone.

The book is available in comic shops and most major bookshops nationwide and from Amazon for just £9.99