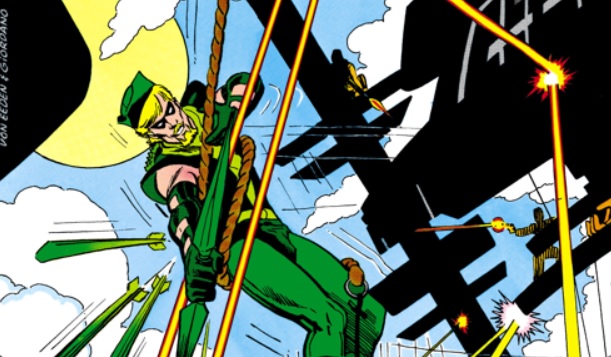 The finale of the Green Arrow’s first ever solo miniseries ends with shock and awe as the truth is finally revealed as to who the mastermind of the whole plot was, but before we get to that, we first have to witness the action of Green Arrow and his allies boarding a ship to find a group of pirates that have already found the sacred vial of Hortonfuel.

Green Arrow is joined by his most recent ally, Agent Jones of the C.I.A. who was introduced in issue three of the series. However, finds might be delighted to hear that Green Arrow is also joined by the love of his life Black Canary, who uses her canary cry to take out several hostiles. Though Jones seems to have to save both Black Canary and Green Arrow’s lives as they continuously become targets for somewhat sneakier hostiles that put the unsuspecting heroes in their cross hairs with a clear shot, before Jones comes to the rescue.

In his only appearance ever, we are introduced to a rather odd yet fun villain who calls himself Captain Lash (or rather Cap’n Lash), who has all the makings of a fearsome pirate from the golden age of piracy, from his costume to his lingo. Captain Lash at first feels like someone who couldn’t possibly pose a threat to a skilled archer such as Green Arrow, but his expertise with a whip prove otherwise, as each arrow Oli fires is slashed away with Captain Lash’s whip with great ease and tremendous speed. This villain is an interesting concept, though as previously stated, this is his only ever appearance in DC Comics, but I personally would love to see more of him because it’s an odd concept to have a pirate use a whip as his primary weapon, and I’d love to see how his whole character came to be or even just see him prove other heroes wrong by actually doing well in a fight like he did in this issue, before he was beaten by G.A. it really felt like he had the upper hand. 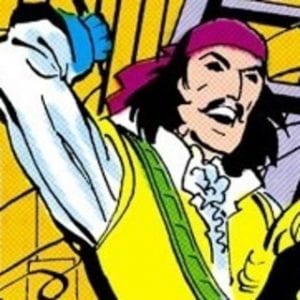 This issue gives us the conclusion to the mystery, as Captain Lash tells Green Arrow who hired him, and though some things can’t be saved, Oliver felt a small dose of triumph as he finally unravels the secrets that have haunted him for what felt like the longest few days of his life. Once and for all he has discovered the secret to Abby’s death, and to the constant threats to his own life, which were all down to one individual, who meets their end in a somewhat surprising and yet unsatisfying end.

Overall, I was a little disappointed with how it all ended, but the journey itself was a great read, with plenty of fantastic panels to read and admire the art of, with action packed sequences and a dark mystery to it all that blended all the best elements of Green Arrow’s character together such as his determination, his frustrations, his humour, and his skill, in order to make a brilliant first solo series for the Battling Bowman!

I would recommend this series as either a starting point for new Green Arrow readers, or as a history lesson for readers who are already familiar with his character in modern age comics, if only to get a sense of how his true journey into solo series comics started off, and witness the evolution of my personal all time favourite hero.