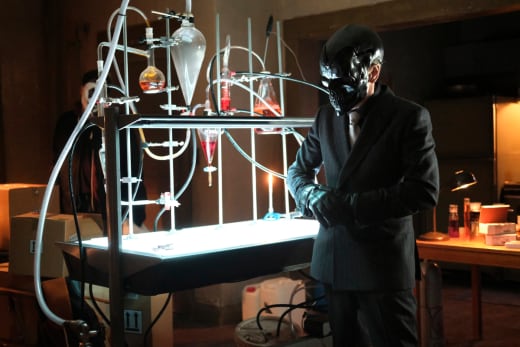 This week was another fast paced start and I am really enjoying that each episode starts at a frantic pace, for me it definitely adds to the intensity of the overall episode which tends to keep a quick pace throughout. So before we get in to my review lets just recap what happened in this weeks episode of Batwoman which was rather fittingly called “Arrive Alive.”

Having kidnapped Angelique last week, Black Mask recruits new drivers to move the ingredients of Snakebite to his lab. In an attempt to track down Black Mask, Batwoman stops one of the drivers only to uncover that it is Sophie who was undercover. After telling Jacob that her cover was blown, he reacts over the top and sends her home and replaces her with another agent. In an attempt to fix things with Sophie, Ryan convinces her that she should go undercover as one of the drivers and they use Mary’s car. 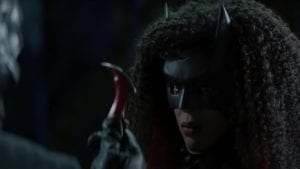 Meanwhile Alice takes Enigma hostage with the view to getting her to remove her memories of Kate. Ryan is able to convince the gang that she should be a driver and she delivers the fear toxin but not before placing a tracker on the canisters in the hope that it will lead them to Black Mask. Alice is having a hard time with her memories which see her come face to face with not only a young Kate but also Ocean.

Sophie follows the trackers to find Black Mask much to the surprise of Luke and Ryan. After trying again to erase her memories, Ocean breaks in to the room in which Alice is holding Enigma hostage and the pair fight. During the fight, just before Enigma breaks free she releases both Alice and Ocean’s memories of each other. The pair later put their differences aside and their tongues down each others throats!

After tracking him down, Sophie is taken hostage by Black Mask but Batwoman swoops in and rescues her. With the pair close to capturing Black Mask, he is able to force them to release him by revealing that Angelique is being held at gun point by the False Face Society. Angelique reveals to Black Mask that her Snakebite recipe isn’t working and that she will help Black Mask to track down Ocean. The episode ends with Sophie examining Mary’s car which has a blackbox fitted and replaying the audio from the blackbox uncovers a conversation between Luke and Ryan in which Ryan confesses to being Batwoman.

This week we got to see tension continues to build between Sophie and Batwoman which was probably always inevitable to anyone who was going to be taking the Batwoman crown from Kate given the relationship between Sophie and Kate. I enjoy the fact that they continue to tease an eventual big blow up between the two and putting my thinking cap on feel as though the eventual blow up could really have a huge impact on the direction of the show if done right. We also now know that Sophie knows that Ryan is Batwoman which in itself is intriguing to see how she will deal with that. 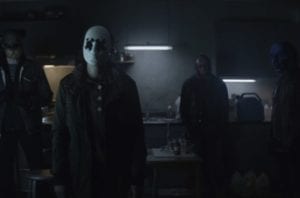 The return of Ocean was a huge surprise and I enjoyed the way in which they brung him back in the episode. He has been the only character who has really ever been able to get close to Alice and whilst their relationship has been rocky to say the least, I’m interested to see how it develops.

One thing I am really loving is Black Mask, I think he has really been one of the highlights of the season for me. Now he isn’t the strongest of villains but he is definitely one of the smartest and whilst at times you think that the good guys have the upper hand over him he pulls things back in his favour like he did in this episode. I really like how he goes from zero to one hundred in his anger when things don’t go his way and he truly has a hold over the False Face Society and all its members. I certainly hope that he stays around for at least a few more episodes!

The last thing I wanted to call out was Crow Agent Russell Tavaroff who definitely got some attention in this episode which leads me to think we will be seeing more of him as the weeks go by. Working under the guidance of Jacob Kane might not be a great thing for Tavaroff but the few scenes in which he did feature showed his inquisitive nature and I think that there is the potential for him to get involved in tracking down Batwoman and potentially getting in the way of things.

Another solid episode this week which continued some of the storylines we have been building over the last few weeks. I did think that the series would plateau after reaching the boiling point of episode 8 but that definitely hasn’t been the case. In fact I feel as though the episodes after that have been more focused on less storylines and it seems as though the show is in a great place and I am excited to see what happens next week!