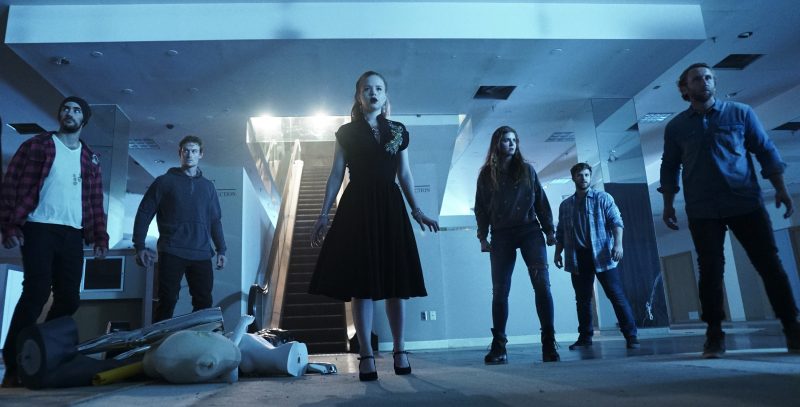 As this episode begins, we see Black Lighting walking through the forest searching for the missing baby that belongs to Aniya. He discovers numerous bodies hanging upside down from the trees; these are people from the Perdi. However, he is met by the San-Jay and with Black Lighting outnumbered, he is knocked unconscious and delivered to their leader Looker. She takes him hostage and plans to get the details of where the other baby is located.

We then cut to Gambi who is still in his hotel room, complete with gadgets and guns. He listens to a radio signal which is from a secure government channel, allowing him to check on the town and any news on Tobias Whale and of course Black Lightning and his family.

Lynn and Thunder visit Aniya and her baby to see how they are both doing, Lynne asks about taking blood from the baby to check everything. However the vial from Lynne’s handbag moves on it’s own, and they are both shocked to see that it is being pulled in by the baby like a metal detector, is she a meta as well? We then cut to Looker as she senses the whereabouts of the baby. After seeing the vision she leaves Black Lighting tied to a metal frame. He breaks free after being electrocuted however this has just charged him up, so he has fun with two of her guards. After freeing himself, he works his way through the house and finds the missing baby. He cradles the baby and starts walking out of danger with the baby, returning her to Aniya.

Khalil and Jennifer meet up again but this time on the race track, where Khalil used to compete. He explains that Tobias is ruling his life and Jennifer is better off without him and she deserves somebody who will afford the luxuries in life without the danger. Jennifer’s reaction suggests that she will always be there for him and he needs to see it out, as she is with her newly found powers.

As Black Lightning trails through the woods, he finds the drone that Gambi used in the last episode smashed on the floor. He speaks to Thunder via comms and warns what is coming from Looker as she is aware of where the baby is. Khalil visits Reverend Holt again as advised by Jennifer but Holt turns a gun on him. Khalil explains that he is trying to warn him off however Holt explains that he isn’t frightened of Tobias and insists that he will not leave. After leaving Holt unsuccessful again, Khalil walks into Tobias’s car and he demands that he gets in. Khalil run away as he knows that Tobias will more than likely kill him. Khalil calls Jennifer to say he’s in trouble and Jennifer asks where he is, he finally shares his location with her and she says that she will help him.

Jennifer reveals she has powers to Khalil and by using her voice she leads him out of danger. Jennifer lights up her hand which reveals her powers to Khalil, who finds Jennifer having powers exciting.

Meanwhile, Thunder comes face to face with Looker as she looks for Aniya’s baby and they fight it out. Black Lightning turns up at Henderson’s house and leaves the baby that he has just rescued with him and heads off to help Thunder out. He saves her from Looker’s strangling grip and she is thrown to the wall where a spike impales her. We then see the silver liquid start to leak from her wound and her people are released from her control. They each walk away and Black Lightning decides to leave Looker for the AHA to deal with. Thunder drives Aniya back to her family complete with her two babies. Aniya greets her father and she learns that some of her family have died as a result of the conflict between the Perdi and the San-Jay. Her father finally accepts the babies are his family too and thunder leaves them to bond as a family.

Jefferson tracks Gambi down and he vents his anger and frustration, but you can see that he is elated to see that Gambi is alive and well. Gambi explains that he thinks it’s best for everyone if they think he is dead, as an assassin was hired to kill him. Jefferson gives him a big hug and they are reunited together.

Personally for me, this next scene is brilliant as it brings two characters together and their story is told beautifully. Lynn arrives home to find that Jennifer is missing, after leaving her a voicemail she is left worried as it is late. We then cut back to Khalil and Jennifer who are talking and enjoying each other company. Khalil explains his appreciation to Jennifer for saving his life and always been there for him even at the bad times. We have seen both of these characters grow enormously this season and a spark between them is strong, more than ever. They both laugh and joke together and Jennifer’s personality is infectious. Their relationship grows stronger and they have a passionate kiss symbolising their relationship and devotion to each other. We cut to them both in a car, deciding they will do it their way meaning they will face the world together. They drive away in a car and go alone. I feel that Jennifer finally feels free and at ease with her powers. But I also feel that she is in good hands with Khalil as he’s a good person and has a huge heart for her, both of them together represent strength and passion and they will face whatever is coming together.