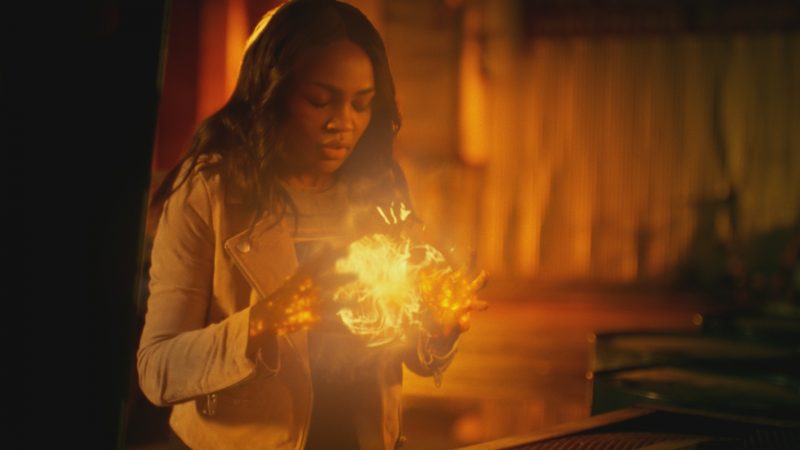 Last weeks episode saw Khalil and Jennifer begin their journey on the run and as we enter Episode 7, we see their journey unfold. For me I have loved watching this episode as it shows a young romance blossoming in a difficult situation. The episode opens with the pair deciding on where to run to next, however, Khalil wants to make a stop to gather money, which they need for on the run. However, Khalil doesn’t realise that Tobias has already put a reward on his head so the gathering of money, quickly turns into a shootout with some impressive action. Jennifer hears the commotion and decides to act in order to save Khalil. She lights up the sky with a boulder of lightning and rescues Khalil, he is impressed and grateful, after all Jennifer has just saved his life. I feel that Jennifer during her reign of freedom is becoming independent and calculating when she should use her powers.

They both decide that they need a plan and we see how Jennifer carefully plans what she thinks they need to do – which is lie low. Her attitude for me really does show how determined she is and her commitment to herself and Khalil. In the car we witness Khalil raise his voice to Jennifer and this is the first time we have seen him act in this way. Clearly, Jennifer isn’t happy with his outburst and quickly tells him that she won’t put up with that and she will “Light up his ass” I totally believe her and Khalil knows not to step out of line again and he apologies. They come up with a plan to lie low at Khalil’s aunties house. After traveling the distance they finally arrive and they are welcomed into the home. However, it’s not long before chaos arrives to test the teens again. Tobias orders Cutter a trained assassin to collect Khalil alive and bring him back to Tobias, however, she decided that a hit means a hit. She enters the house and with Khalil accidentally shooting his auntie with the sedative, Cutter now has a clear vision on Kahlil. A fight breaks out and we are treated to an action-packed fighting scene which is brilliant. Cutter stops Jennifer from getting to Khalil and by putting a blade to Khalil’s throat she nearly ends it all but Black Lightning and Thunder show up and Black Lightning lights her up! However, Cutter is able to slash Khalil on his stomach leaving a nasty wound.

With all the commotion, Jennifer and Khalil manage to slip away in the nearby forest. However its clear that Khalil’s wound is having an effect on his mobility. Even with his enhanced immunity, he is struggling. Gambi tries to follow them with his drone, however, Jennifer destroys it and Gambi loses track of where they are. Jennifer also removed the tracker that she found on Khalil’s neck when she decided that he needed a haircut when they first arrived at his auntie’s. For me, this episode shows how powerful Jennifer is and it centres on her and Khalils relationship, they match so well and they are finally brought together! This episode also highlights for me how strong the women are in this episode, very strong independent female characters, fantastic!

Chapter Two: Gift of the Magi

This episode continues with Jennifer and Khalil’s journey on the run. We see Jennifer and Khalil lying low in a disused barn deep in the forest. Khalil’s condition is certainly getting worse and its clear that Cutter’s blade is laced with poison, as Khalil deteriorates its clear that Jennifer clearly loves this boy and she will do anything to save and protect him. She steals antibiotics from a local hospital in an attempt to save him, Jennifer sees Thunder and Black lightning in the same hospital but she makes a quick getaway. After injecting Khalil with antibiotics it has no effect and for the first time, we see how vulnerable the teens are. Jennifer heads outside to get five minutes and she breaks down in tears, fearful that he will die.

I personally feel that we are seeing Jennifer grow into a strong and independent woman just like her parents. Whilst she is outside she uses her powers looking into the forest and realises that she is being watched. She discovers that Cutter is watching her and she knows the danger that they are both in, she runs back inside to Khalil to protect him. When Cutter enters the barn with a sharp blade and approaches Khalil, it becomes very tense but Jennifer stalks Cutter from behind and attacks her with her powers disarming her. Again we see how Cutter a strong independent woman in portrayed and how Tobias hires her showing how powerful she really is. Jennifer ties Cutter up and demands that she tells her what poison she has used to kill Khalil. Cutter simply laughs in her face so Jennifer doesn’t hesitate to torture her to get what she wants. She uses a lightning bolt a few times on her neck and slaps her! Jennifer has no hesitation and for me, it shows that she won’t take any rubbish from anyone. She is fierce and determined and clearly loves Khalil but will her actions have an effect on her later?

I also see how she is growing incredibly but needs guidance from her father and sister. Jennifer is very clever and this helps her in this situation, She realises that the antidote for the poison should be kept on Cutter incase she ever gets infected with it, Therefore she slashes Cutters face and waits for Cutter to become fearful. She tells Jennifer that the antidote is on her necklace. Jennifer takes it and kicks Cutter in the face knocking her out, very brutal from Jennifer and we haven’t seen her act in this way at all. We see her father in this shot and she is just like him, reflecting a very strong woman! Khalil takes the antidote and he recovers quickly. Jennifer is relieved and she tells him she loves him, he says it back but staggers as he cant belive she actually loves him, a very sweet moment that i have been waiting for, for a long time. They head off in a car to get away from Cutter.

We then cut to Tobias in a club taking in the entertainment, we also see a guy called Todd. He’s very smart but keeps getting knocked back because of his skin colour. When he arrives back to his car after another missed opportunity, Tobias’s card is left on his steering wheel stating ‘You deserve better’. Todd visits Tobias to see what he wants with him and it seems that Tobias us recruiting him to gain power. He offers Todd a job and deposits 100,000 in his bank account straight away. He can’t really say no and although he is clever, he has let himself down here and working with Tobias is never a clever thing to do. Will he be Khalils relacement?

The episode ends with a hitman that can teleport. We see him murder a bar full of people very easily. He is brutal and powerful. He receives a phone call which tells him he is needed in Freeland, could this be Tobias on the phone? Could this be a hit on Jennifer and Khalil as Tobias learns that she is now involved in some way. The next episode is going to be explosive! The last 2 episodes following Jennifer and Khalil’s story has been incredible and their performances have been incredible, I really can’t wait to see their next journey together.