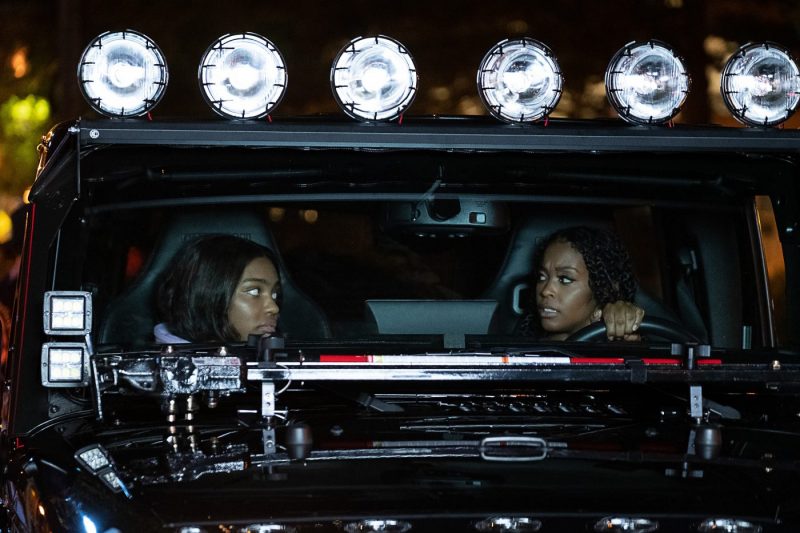 After a thrilling season, I really can’t wait to see what’s waiting for the Pearce family, not to mention a few characters returning. I have to say, I think the title ‘Birth of Blackbird’ is just so fitting in todays world, the strength of a young woman. It represents the power of change and stripping it right back to basic, just doing whats right.

After leaving season two with big spoilers, we have been promised or another thrilling season of power and unity. Season 3 opens with Jefferson Pearce being held in the custody of ASA. Dressed in head to toe white jacket and device around his neck, it’s clear he’s not protecting Freeland currently like he once was. Anissa on the other hand is on the outside doing what she does best, protect her community. She teams up with reverend Holt and visits the place where anyone incusing children are being kept, if they are suspected of being a metahuman. The surroundings are grim and seeing innocent children grasping onto the ‘prison’ like bars, certainly plays on Anissa. Her role is to make sure they are being looked after and treated correctly, however with the prison guards watching constantly, it’s difficult to see how they can feel like children.

Suddenly a huge blast and explosion reveals a figure complete with a mask, he makes light work of the guards bullet, he uses his meta powers to revere the bullets and kill all the guards. His name is Cyclotronic and has a desirable power that certainly makes him vulnerable. He is quickly greeted by commander Carson Williams who orders him to follow the rules, he then kills him witnessed by Anissa.

Jefferson is reunited with his wife in the facility and they prepare to leave the facility as agreed. However agent Odell interrupts them and tells them that Jefferson cant be released because of the Markovian metahuman that broke into one of the ASA’s facilities. This news makes Jefferson angry, understandable. He reminds Odell of the terms that he agreed too, of him being taken into ASA custody, basically his wife and daughters are to be kept out of the ‘war’.

We then cut to a familiar pace, Jennifer’s school and as she walks on the corridors, her face begins to light up with surge of electric, she quickly runs into the toilets to hide her pain. Her powers are unstable is she becoming stronger?  We then see Henderson, a favourite of mine as he supports Jefferson and tries to do the right thing even when it seems possible. He meets with commander Carson Williams, which doesn’t go down well at all, after a few punches Henderson has to agree to the press conference that Williams wants. Basically telling Freeland to obey the rules and speak out of any meta humans that they see.

Anissa shows us her new pad and new virtual assistant meaning that her new home must be kitted out courtesy of Gambi. Of course I was right, she approaches her bedroom mirror and says ‘mirror mirror’ the mirror then disappears and opens up a space to computer monitors and tech, where she is then greeted by Gambi’s voice. Anissa learns that her parents aren’t out of the facility just yet like Odell said. She learns the reason why. Gambi explains that her father’s powers and mothers research and knowledge of meta human is very valuable to the ASA. She reacts by teaming up with Gambi on a new plan of action; they want to stop a bus on the way to the ASA. The bus is packed with children and adults of all ages, Instead of her suit she sticks with her ‘blackbird’ outfit black leather hooded with a face mask. The plan works and she hijacks the bus and takes them back to the church of reverend Holt.

Gambi shows Anissa footage of a shapeshifter who appeared to be a leopard in the area, Anissa believes that this mysterious person is her ex Grace, who she clearly cares about. Jennifer calls Anissa whilst she enjoy a night in with a new girl, she picks up Jennifer who was using the cloaking device that Gambi gave her to use her powers. It’s a lovely scene to see the sister’s back together stronger than ever.

Together with Gambi’s help, they decide to get the people from the bus out of Freeland through a small opening on the perimeter of ASA. Anissa is attacked as soldiers swarm her, she fights them however she gets hit which leaves her behind the perimeter. Jennifer is worried but Gambi insists to wait and she will be ok, we then cut to a familiar character who just keeps coming back Lala. He wakes up and its up in bed, with the briefcase on the table next to him!

Overall, what a great opening!!

With the Markovian power lingering over Freeland and its community, togetherness will be the key in defeating them for good. A few old flames will be reunited with us along the way and I can’t wait for the spark to flame!!