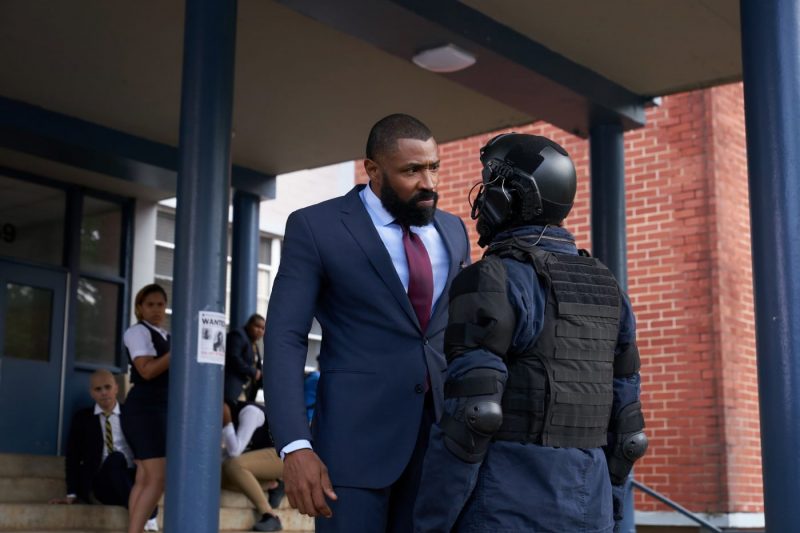 So what have we learnt from the previous episodes?

Well the ASA’s hold is well and truly over Freeland, and the pierce family. Agent Odell has turned Painkiller into his own assassin, not hesitating at choosing his next target, even painkillers own mother. Blackbird is busy working under the spotlight helping the people of Freeland deal with this force. Jennifer is continuing to use her powers more frequently with the help of Agent Odell who stops by her home uninvited. He takes her out on small planned missions, which she enjoys as she uses her powers to blow buildings up, she is very trusting! Lynn is working flat out in the ASA lab to try and cure the virus from the patients; however it becomes clear that Odell must have a plan alongside this, what’s in it for him?

This episode has a lot of content in which delivers motive for different characters. During a lesson at the Freeland school, Tavon one of the students, is taken away by the ASA suspected of being a Meta. Whilst the class and their teacher try their best to stop them taking him, he removed promptly. Blackbird helps him and delivers him to the wood and the ‘Perdi’ where he will be looked after, instead of being kept in the ASA facility. With blackbird interfering continuously, it doesn’t take long for Odell to get annoyed and suspicious with blackbird’s identity. After looking through Blackbird footage he narrows down her identity and Anissa’s face is generated on his computer screen. He orders Painkillers who he sees as his biological weapon to pay blackbird a visit. Blackbird is now high priority and needs to be stopped to allow Odell to carry on his work.

Lynn wakes up from a nightmare of a young girl who pushes her powers to the maximum and disintegrates. Jefferson asks if she is ok and Lynn insists that she needs to go back to ASA lab to continue her tests. She looks for her bag at the side of the bed and takes another green capsule; she is now an addict to the Meta vaccine pill, which Odell had planned all along. Lynn’s behaviour is erratic and obsessive however Jefferson suspects nothing and goes back to sleep.

Whilst in the lab, Lynn discovers that she has identified the protein to stabilise the gene however it can’t be synthesised in the lab. She will need to extract it from a human host. Odell bring in patient 49 who is Tobias. Lynn is understandably furious! Lynn administers the MB4 serum and Tobias whist laying there, informs her that he has joined all the dots up and knows their family secrets!

Jefferson tells Anissa to bring Tavon back to Freeland, as they both leave they walk right into painkiller who attacks them both and administers venom to both of them. Anissa calls Jefferson who comes to their rescue; however Tavon can’t be saved and dies in Jefferson’s arms. Odell is notified of blackbird breached the perimeter, he visits Anissa’s home and is shocked to see her standing there and rules her out of being blackbird or foes he. Grace is able to shape shift and relaxes as soon as Odell leaves.

As the students leave school they learn of Tavons death and how it was caused by the ASA. They start to abuse the ASA guards and one of the students is attacked. Jefferson gets involved and quickly heats up with anger. He hides his powers as he is beaten to the ground, round the corner Jennifer and Brandon who seem to be getting on quite well witness the attack. Jennifer’s eyes begin to light up and Brandon pulls he away from view, he then absorbs her energy surge, is he also a Meta? Jennifer then gets in the car with Odell who reveals the guards location who attacked her father. He is encouraging her to use her powers for revenge.

Henderson arrest Reverend Holt and 2 bits for stealing ASA supplies and working with Blackbird. Henderson drives them both to an empty location and tells them about Tavons death and shows them the video of Jefferson being assaulted by the ASA guards. He reveals that he has been with Freeland all along and involved in a plan to get Freeland back to where it used to be, with the people. He tells them they need to join him in the fight against the ASA. Proving he isn’t a sell-out but he has been leading the resistance all along! They are both relieved and soak up the spirit to fight, they ask what back up he has and blackbird appears stronger than ever. We are in for a treat!

As the people of Freeland are uniting to take back their community and town. It’s only a matter of time before Jennifer and her family run into Painkiller’s path. Will her presence override his brainwashing?

This is going to be electric and I can’t wait to see what happens!