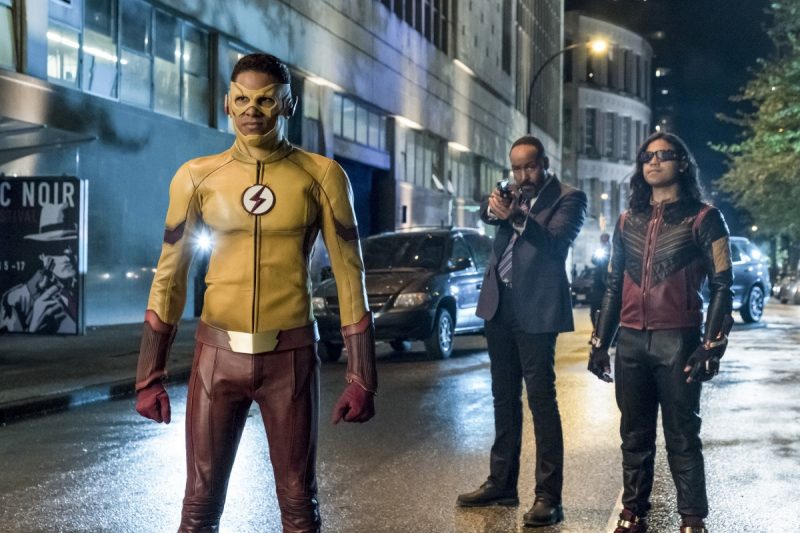 “We back baby!” Say no more Cisco, say no more.

The Flash returned with a thrilling Season 4 opener. Well, except for the part where we flashbacked to last season’s finale. Thanks for reminding us how much of a bummer that was and breaking our hearts all over again.

During Iris’ opening voiceover, did anyone else think for a flash second that it was her zooming through the city? No? Just me? OK. Fine. That would have been awesome though, seeing Iris in a Flash suit zipping through Central City!

But it’s just Wally (Kid Flash), oh and Cisco (Vibe), oh here comes Joe too. All three in pursuit of Peek-a-Boo, making her grand entrance on screen with a little surprise and delight double hook, knocking out Team Flash during what seems to be amateur hour. Too harsh? Sorry, maybe I just really miss The Flash. Nevertheless, the opener was very exciting with a speedster vs teleporter rooftop chase, accompanied by some sweet special effects. Let’s not forget Iris (the love of the love of our lives). It was enjoyable to see Iris take on a Felicity/Oracle type of role, adding her own spunk and vigour. I do recall her promising The Flash she’d keep running. Seems she didn’t even make it past S.T.A.R Labs. We don’t blame you, Iris. We would’ve done the same thing.

Kudos to the show for putting the spotlight on Iris at the beginning of the season. We got a glimpse into her life after she lost Barry to the Speed Force. From sleeping on the couch, to a photo frame face down, it was clear that after 6 months, Iris was not OK. None of us are OK. Flash where are you?!

They don’t give us much time to grieve, as an electric blast whooshes through Central City and Holy Ronin it’s a Samurai with jet pack wings! A ROBOT SAMURAI, dammit. If you’re into the comics, then you’ll know this is no ordinary Samurai, this is a Samuroid. Created by Baron Katana and first introduced in The Flash #180 issue. Inner geek screaming internally. But of course our new favourite villain has one demand, “bring me The Flash or else your city falls.” Shortly after, sending an electric blast through the ground with his Katana Sword then activating his wings and jetting off into the distance. Now that’s how you make an exit!

OK Flash, you can come back now. Oh, but wait, Cisco has a plan brewing and Iris is not on ‘Team Cisco’ for this one. Avoiding the possibility that Barry may or may not be brought back, Iris urges Team Flash to find other ways of taking down the Samuroid. However, there is no stopping Cisco, who is hell-bent on bringing back our favourite speedster. This means getting Caitlin Snow (who was expecting him) back on board. Yes, Team Flash is slowly coming together again. And don’t think we didn’t notice that sneaky reveal of a few Arrow characters who helped Cisco brew his plan. This obviously means they survived the explosion on Lian Yu!

In the spirit of bringing back old friends, we are presented with the Speed Force Bazooka. Yippee-Ki-Yay, let’s bring Barry back! OR let’s give the Quark Sphere a whirl and open up a portal downtown where a wild Flash suddenly appears, unbeknownst to the rest of the group. Conveniently, Iris shows up right after the plan seems to have ‘flopped’. HOW CONVENIENT. But, don’t worry Iris, you can thank your lucky stars that a butt-naked, bearded Barry Allen has appeared. I mean, he may not be himself, but he’s back. Certainly not the lively Barry we’re used to. Now he talks gibberish, writes wacky symbols on essentially any wall he can find and has not a clue in the world who Iris is. Hit us right where it hurts why don’t you (I’m looking at you Flash writers)!

How do we bring Barry back? Two words, Lady Gaga. We Flash fans appreciate this homage to the pilot. Well played. Unfortunately, even Gaga is not enough to save Barry, so back he goes to being contained while they evaluate the situation. But, do not fret, Iris West has a plan and it involves three little words; “come get me”, she says from outside the cortex.

Iris confidently turns herself over to the Samurai. Which causes a panicked Joe to plead with Barry to snap out of it. After a couple of desperate attempts, Joe finally convinces Barry that Iris will die if he doesn’t snap out of the funk he’s in. A rapid electric jolt in the right eye and WE BACK BABY! The Flash zips through The Cortex, taking the new suit with him and racing after the flying Samurai carrying a damsel in distress. Or more like a damsel with a good play. Zipping through a wind farm, he saves his damsel and unveils the Samurai to be a robot, that was controlled by The Thinker. I have a feeling we’ll be seeing more of The Thinker this season. Bring it on!

Meanwhile, Caitlin practically agrees to re-join Team Flash, but she hasn’t tossed Killer Frost to the side yet. We get a taste of Killer Frost when she kicks that guys butt at the bar. But she seems to be struggling with her identity and transitioning between Caitlin Snow and Killer Frost. The “not again” implies that she might not know how to control her alias Killer Frost from revealing herself at any given time. Something to look forward to this season! Keep an eye out for Caitlin/Killer Frost.

Well, in conclusion, it’s so great to see The Flash has been reborn and reunited with Iris. I can’t help but to be a little sceptical of whether The Flash is back to his true self. It’s clear the Speed Force changed him, but I’m curious as to how.

When Cisco encrypted some of the symbols Barry had been writing and they translated to THIS HOUSE IS BITCHIN’. I’m going to need some serious answers to that. But also, GOOD ONE GUYS!

What did you think of The Flash Season 4 premiere? Share your comments!