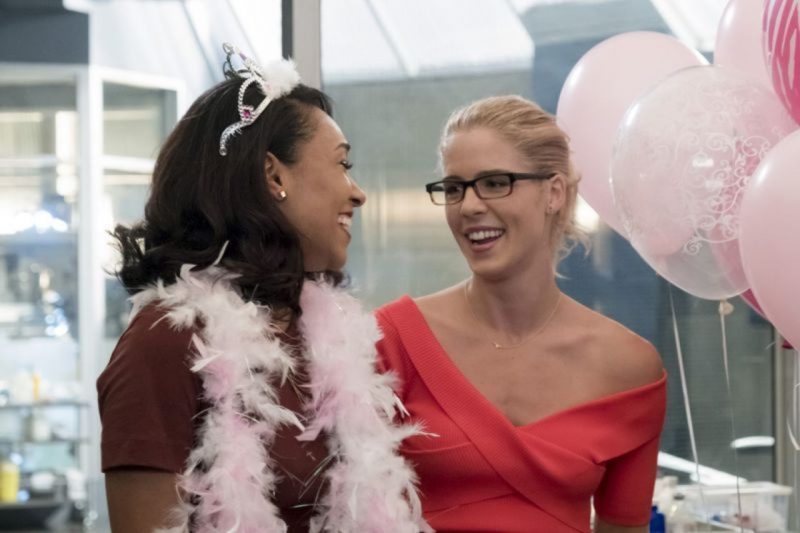 Who agrees with me that this might just be one of the best episodes of the season? I know it’s early days, but this was a strong episode for many reasons. The main one being that there was a strong feminist vibe throughout the episode. Girl power rocks!

Caitlin, Cecile and Felicity (yes, our favourite) grouped up for a night out to celebrate Iris’ bachelorette party. Felicity being Felicity had plans for a crazy night, but Iris being Iris just wanted a nice quiet dinner. Iris got quite the opposite when one of Amunet’s henchmen, Norvak, rudely interrupted. With no choice but to step up as Killer Frost, Caitlin deals with Norvak, who seems like an easy defeat, once again. Now it’s a party, with Killer Frost out from hiding, you knew some bad-assery was about to go down.

We are finally introduced to Amunet Black (played by the very talened Katy Sackhoff), a powerful lady who has been pulling the strings on Killer Frost since Caitlin left S.T.A.R Labs. Caitlin wants out, but Amunet refuses to let her leave. I smell a fight coming on. This is when we’re also introduced to a new meta who has been tortured and kept hostage by Amunet and her crew. His name is the Weeper (of course) and his tears are a love drug. What a perfect little thing for Amunet to cash in on! Trouble is coming and part of Team Flash are unreachable. Time for the ladies to step up and take matters into their own hands.

Meanwhile, what was supposed to be a quiet night, turned out to be one of the messiest and greatest Bachelor parties for Barry. From Joe’s to Golden Booty strip club. No thanks to Ralph of course! Things aren’t looking good for Barry, who is a drunken mess, announcing that he is The Flash to complete strangers. This episode took things to a whole new type of awkward when Joe realises that Cecile’s daughter is one of the strippers. And just when you think it couldn’t get worse, Ralph (yes, Ralph) gets into a fight and the boys end up in jail for the night. Well, maybe not all night as Well’s comes to the rescue.

It’s not only the boys who are running-amuck, the ladies have trouble of their own and are taking matters into their own hands. Iris, Felicity and Cecile team up to help free The Weeper. They’re no match for Amunet and are quickly caught out. Don’t panic, here comes Caitlin/Frost to take away Amunet’s power metal and save the day. It’s great to see Caitlin have a bit more control over her Killer Frost identity.

Meanwhile The Weeper’s escape is interrupted by the evil man in the floating chair. It seems The Thinker has plans for The Weeper and is not quite finished with him. Looking forward to meeting the rest of The Thinker’s creations!

Overall a fun episode mainly based on the females being the superheroes. What a nice change for The Flash. Hitting all the right notes for equality in a television series.