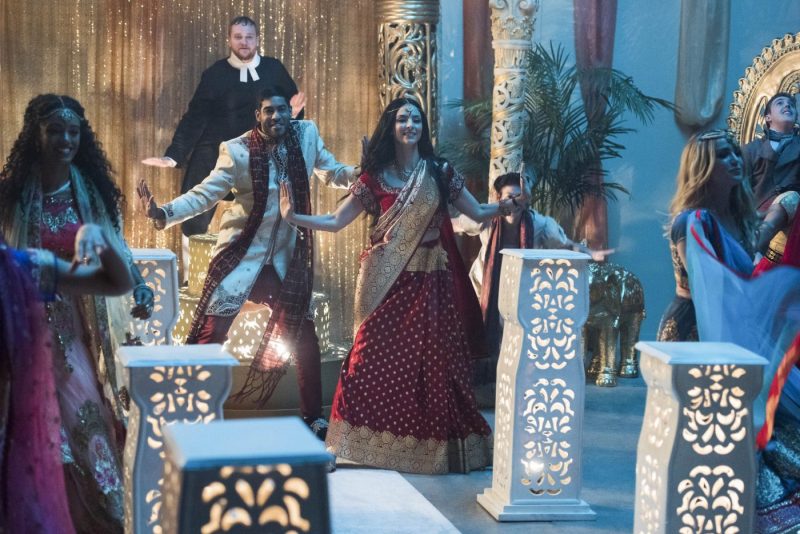 When Mona discovers that her favorite author might be at the epicenter of a magical alert, Mona, Sara, Charlie and Zari find themselves in 1809; Constantine and Rory perform a séance and receive a message that rocks Constantine to his core.

Only Legends of Tomorrow can pull off such an episode as this. To start with the emotional strain that a funeral puts on people, to then go on a sexual adventure with the “climax” of a Bollywood number you have to give credit where it’s due and the writers of this fine show deserve it all.

‘Life seems but a quick succession of busy nothings.’

Mild spoilers ahead – As the above paragraph suggests, this episode takes place on the day of Hank’s funeral and there is a lot to that happens in what is quite a short space of time. This is probably one of the sexiest episodes of the Legends series. The, with a character such as Sara Lace in the show, is it any wonder. Just about everyone is at it.

‘There is no charm equal to tenderness of heart.’

The funeral is a grand event, lots of people there to say goodbye to Hank. Nate, when asked to make a toast to his father, sees this as an opportunity to tell the truth about him. This all down to some inadvertent advice he receives from Mick, who seems to be getting good at that week in week out. Thanks to Mona’s alert about Jane Austen novels disappearing, Sara and Zari join her and Charlie in 1809. Before leaving however, Nate and Zari have a tender moment where they almost kiss.

Ray, meanwhile is left back on the Waverider having been contacted by Nora, stays on the ship hiding her. It’s all set up for some saucy shenanigans as they bump in to the Hindu God of Love . There is plenty of to-ing and fro-ing with the God, and Zari struggles with temptation. S almost completely succumbs to his charms. Mona is also struggling with the consequences of her time with Konanae. This leads to tensions between herself and Zari, who struggles to open up her heart, in particular to Nate. All of this stress causes Mona to wolf out, taking her to Jane Austen who talks her down and gives her some well conceived advice.

Without spoiling too much, we descend into Bollywood territory. We are treated to a musical number starring the majority of the cast, with Zari taking the lead. With Mona back to normal, it’s up to her stop Zari from going too far with the God.

‘Respect for right conduct is felt by every body.’

What of Mick and John Constantine? Well, these guys stay behind at the funeral. It’s not long before John notices something amiss, Hank’s spirit has not left as he has something left to say. As you will know from the previous episode, Nora did not kill Hank and this soon becomes apparent to John. Conducting a séance , he helps Hank take over the body of Mick. This helps him get his message out, admitting who has been behind everything. This has some grave consequences for John and ensures that the season going forward will become more emotional going forward. The ending sets everything up nicely and I hope we get to see plenty more of the big bad, Neron.

This doesn’t cover everything that happened in this episode, if I carry on, it could end up akin to Tolstoy. It has everything that has been great about this season of Legends of Tomorrow – SEX, DRUGS & BOLLYWOOD!!!

The performances were great, in particular Tala Ashe and Ramona Young. Throw in Matt Ryan and you have a great hat-trick of performances.

This episode was all about women power and we should all be thankful for that. This is a cracking episode that takes us through the whole spectrum of emotions.

Quote of the episode came from Charlie when she said to Ray:

‘Buffing the old Bishop’, when she saw him trying to hide something (or Nora as it were).

An easy 9/10 for me. If you’d like to give us your own thoughts then please do so below or on any of our social media pages.