A robot under the influence of ecstasy, a Willy Wonka musical number, a sex demon and the mother of house parties. Just some of the highlights in “Sex Patrol”, the absolutely packed fourth episode of this deliciously bonkers second season. For a show that has gathered a reputation for being fearless and willing to take risks, adapting the most left field of the source material to create the show, it could be said that this is a perfect example of them turning the dial all the way up to 11 and then some!

The basic premise of the show was the residents of Doom Manor striving to fix Danny the Street, and restore them to their full self. The best way to do that? Gather up all the old Dannyzens and throw a huge party! Cue a welcome return to the show for the likes of Flex Mentallo and Maura Lee Karupt. Providing wonderful moments of comedy and also wonderfully tender segments too, this was a beautifully executed piece of television. There truly was something for everyone on offer and I enjoyed every moment of it.

Once again, the star of the show was Abigail Shapiro, with her excellent portrayal of Dorothy Spinner. Fast becoming the emotional centrepiece of the show, the scenes that she inhabits display a great range from this talented actress. One’s heart does go out to this wretched child, struggling to find acceptance due to her simian appearance and desperate to experience life and all it has to offer. As a die hard fan of the magical Willy Wonka & The Chocolate Factory, to get a nice blast of Pure Imagination from the Caulder family was a lovely treat indeed. Enough to bring a tear to a glass eye. 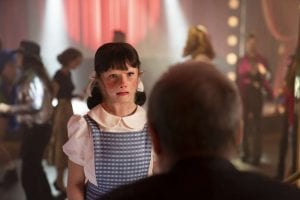 Now, it wouldn’t be Doom Patrol without a potent dose of lunacy, and “Sex Patrol” ticked that particular box several times over. Enter, the SeX Men! Based on the premise that Flex’s posing unleashes a wave of sexual gratification (remember season one episode 14?), an evil sex demon is awakened from his slumber, feeding on the paranormal sexual energy to birth a sexual Antichrist of sorts. Still with me? The SeX Men promptly arrive to put paid to his horny schemes. What a team they are, a combination of the Ghostbusters and a government black ops team, this trio exist solely to deal with sexual paranormal activity, and business is booming here! The exchanges with the Patrol and the SeX Men are great fun and have to be seen to be believed. To see such a motley crew in the throes of sexual ecstasy whilst dealing with an end of the world scenario is this show at its very best.

This episode was hugely entertaining and continues the show’s hot streak. Projecting positivity and inclusion throughout, it was a neon-hued, fun-packed hour of television. Despite Dorothy’s inexorable slide towards darker times, there was lots to enjoy here and I strongly urge that everybody checks it out. With this season being a mere 9 episodes long, we are already at the halfway point of the proceedings now so everybody must strike whilst the iron is hot.