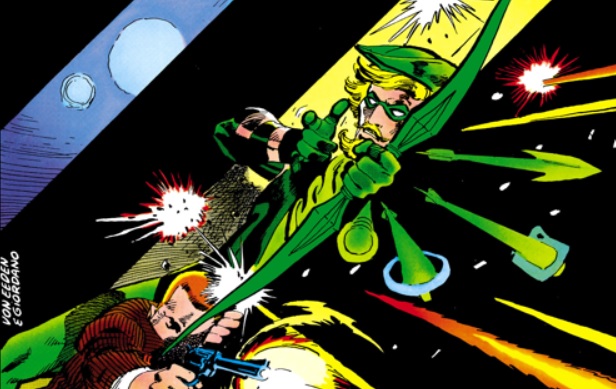 The mysterious case of Abby Horton’s death continues to haunt Oliver Queen as we head into issue three of Green Arrow’s first solo miniseries. In the last issue we watched him battle it out with Count Vertigo, and win of course, but in the final pages of the comic, we saw that Ted Horton had left a strange hexagon drawing in the sand before he drew his final breath after falling off the cliff face. This shape leaves Oliver with more questions than answers as it connects to the hexagonal ring that was found in Abby’s hand when she passed.

This issue starts out with some great humor, as we see that Green Arrow has captured Vertigo and is toying with him to get some answers, by placing various fruits on his head, such as an apple, a lemon and eventually a grape, which he aims his bow at and shoots arrows into to make the Count nervous enough to talk. Now with new information, Oliver drops an unconscious Vertigo off at the police station, and continues his search for clues, by showing the reader a flashback about how this all began.

Oliver soon realizes some new secrets but is unable to get to them using his usual methods as Oliver Queen, so he decides to make those who wish him harm believe he is no longer a threat, by reliving his younger days as a billionaire playboy, blowing his money of drinks and unnecessary items to throw off their scent, but this has its own consequences for those who also loved Abby and want Oliver to find her killer, as they also lose faith in him. However, Oliver is still hot on the trail of clues, and when help comes from an unlikely source, Oliver finally discovers new information, but little does he know that the enemy are also one step ahead of him, and once they realize he hasn’t given up, now knowing too much, they try their best to eliminate Oliver Queen.

Whilst the colours in this issue aren’t necessarily darker, there is a lot more use of shadowing in each page, that adds a very fitting darkness to suit the plot of the series. Each character stands out on their own and the artists are ensuring that each character is refined to have their own personality on the page, which makes for some excellent panel art that brings the story to life.

The story itself, written by Mike W. Barr gets darker with each issue, with plenty of mystery, drama, action and just enough humor to keep it entertaining, as well as ensuring Green Arrow and Oliver Queen don’t lose their most important character aspects, so that the readers and fans, know who they are reading about, in order to not lose the character by altering him beyond recognition.

With one story left in this series, the mystery should finally be unraveled and Oliver Queen should find some sort of peace in the end to start his new equilibrium, whether that be with or without the company and the money. Either way, this story will conclude in Green Arrow #4: Showdown at Sea!