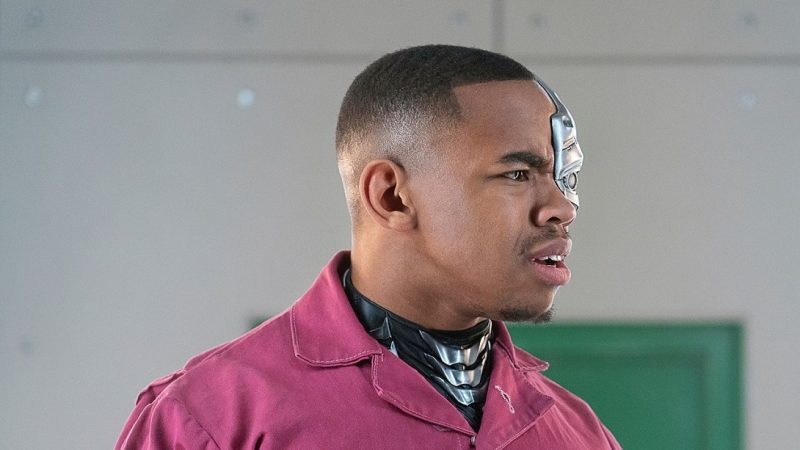 Take a trip down to the farm this week, but watch out for those dangerous butts! Another episode this week that straddled the line between being wonderfully absurd yet with an abundant serving of family moments. Fundamentally a prison break plot, but with a Doom Patrol style spin on things, ‘Cyborg Patrol’ was another triumph. With Vic getting his chance to be front and centre in the proceedings, the shocking ending to the episode sets up a very interesting last few episodes regarding the character and where he goes from here.

Picking up essentially where last weeks episode left off, with poor Vic being held captive by The Bureau of Normalcy, our favourite team had no option but to call for help. Enter Silas Stone, conscripted to help break out his son. In what could potentially be Phil Morris’ swansong appearance in the show, he delivered a performance full of the expected levels of gravitas and charisma one comes to expect from such a veteran talent. His interactions with Joivan Wade were some of the most heartfelt of the entire series, with the familial bond really made apparent. Morris’ portrayal of Stone has been a joy throughout the series. No stranger to DC fans due to his portrayal of Martian Manhunter in Smallville, I really hope that the character can make future appearances further down the line, especially in tandem with Timothy Dalton’s Caulder. Any exchange between these two heavyweight actors has been must see tv and I hope we can have some more of it.

Despite the rescue of Vic employing the familiar tropes of let’s pretend to double cross each other but it’s part of the plan really the methods employed by Silas and the team used some inspired moments. Rita hitchhiking her way into The Farm by literally being inside Cliff was a moment of comedy mixed with some gross out visual effects. Jane deliberately getting captured offered one of the most laugh out moments of the season to date, as her would be torturer employed the often maligned ditty (rightly so) “The Sign” by Ace of Base. Seeing a Bureau agent peruse his arsenal of torture goodies to the tune of this eurodance hit was hilarious, as was a brief return for the psycho Karen, one of Jane’s alternate personas.

As mentioned earlier, the main performance this week was Joivan Wade as Vic. Given more to do in terms of his emotional heavy lifting than before, his performance was top drawer. Slowly being pushed to the edge by his incarceration, the reboot attempts of Grid serve to push him towards insanity, not knowing what is real and what is not. Incidentally, his fellow inmate in the next cell was none other than the previously mentioned Flex Mentallo, destined to play a bigger part in the rest of the series……

Vic’s inner psyche was exposed in greater detail than before. His character may be a celebrity hero, feted by the public with a Justice League level profile, but he is just as damaged as the rest of the Patrol. Riddled with guilt over his mother’s death, and petrified with his perceived transition from man to machine, Vic is damaged goods. The level of that damage is only going to go higher judging by the ending of the episode, as an unspeakable tragedy hits him. Without looking to massively spoil the episode, it will be hard for him to come back from his actions this time.

One final welcome return to the show this week was Alan Tudyk as Mr Nobody. Revealed to be the puppet master behind Vic’s tribulations, his brief cameo at the episode’s conclusion was full of menace and venom. With just a handful of episodes left, it will be interesting to see if he gets greater screen time from this point on.

A great episode with a lovely mix of humour, violence, tragedy and a sad farewell, as we march towards seasons end it will no doubt be a wild ride from here on in. Strap yourselves in and let’s see where we are taken next!