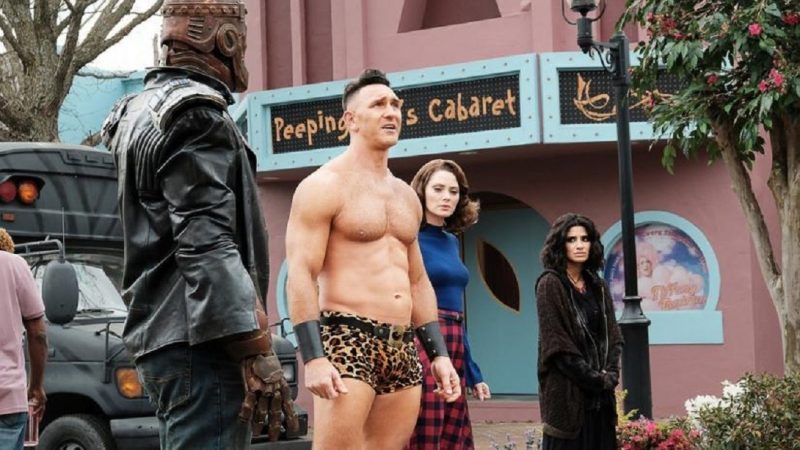 Just when we thought the bar couldn’t go any higher, the penultimate episode of Doom Patrol somehow lifted it just a little more. From a glimpse of Mr Nobody’s backstory, to the most “orgasmic” scene ever filmed, to a cliffhanger that makes next week’s finale a must see. This episode had a little bit of everything, and in this writer’s opinion was the highlight of the season so far. A perfect storm of comedy, heartbreak, and not one, but two whopping revelations that are going to massively affect the relationships of the lead characters moving forward.

First up was a nice glimpse at Mr Nobody in his pre-transformation days as Eric Morden. A true sad sack, newly expelled from the Brotherhood of Evil only to be dumped by his girlfriend Millie, the character is shown at rock bottom. (Was that gorilla mention a reference to Mallah maybe?). Tudyk’s performance was such that I felt a real sense of pity for the character, despite knowing the evil path in his future. Despite limited screen time this season, Nobody has been a real highlight of the show. Lighting up the screen in every scene, stealing the show, his total glee in everything he does is delicious fun. I hope that the rumoured second season gives Alan Tudyk even more to do.

Picking up with our team where we left them last week, with the newly recruited Flex Mentallo part of their quest to locate Niles Caulder. And where does this quest take them? To none other than Danny the Street, the last known location of the much missed Beard Hunter. This was the cue for the most awkward, hilarious and cringeworthy scene of the entire season. Trying to tap into Flex’s ability to access the “white space”, the mysterious realm that Nobody has imprisoned Caulder inside. To try and describe this scene would not do it justice, so please see below. Sit back and enjoy….

A scene both daring and provocative in its execution, special mention must go to Tommi Snider (Beard Hunter) for the most repulsive yet strangely endearing face, pulled whilst in the throes of ecstasy. If you missed it, go back and watch it again, it is guaranteed to make you laugh for days.

The other main plot thread involved Vic and his convalescing father, Silas. The tragic truth regarding the demise of Vic’s mother is revealed and the most emotional scene of the series ensued. The dramatic interplay between the two actors was superb, as Joivan Wade and Phil Morris really gave heartbreaking performances. Silas was really left with an impossible choice following the accident, and did the only thing he could really do. How Vic can eventually reconcile with him remains to be seen.

The final act of the episode was the most shocking (although not to viewers familiar with Grant Morrison’s comic run). Reunited with Caulder in the White Space, an initial victory is revealed to be nothing more than an illusion courtesy of Nobody. The jaw dropping revelation revealed by a broken Caulder is guaranteed to shock and appal in equal measure. Where the team goes from here remains to be seen. One would imagine that the bond between them and Caulder will be broken irrevocably, or is it? The final episode is going to pack so much into its running time. May 24th cannot come soon enough, when this genius series comes to its conclusion. Until, of course, they announce a second season. They have to, right?….