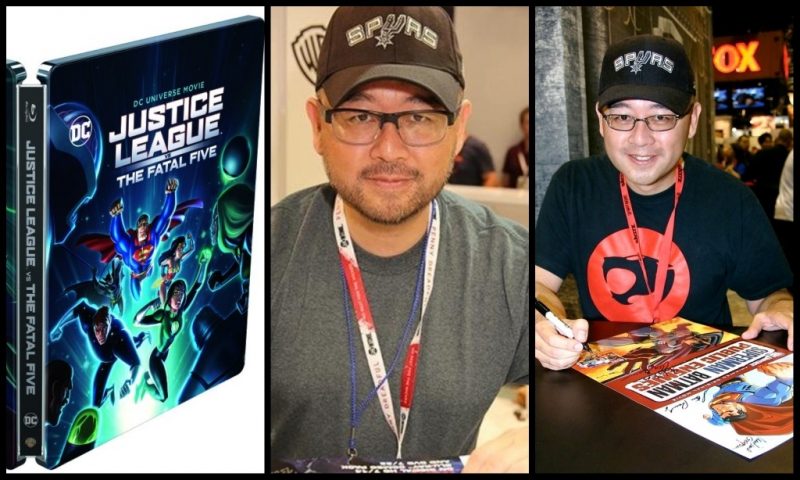 Thanks to the wonderful people at Warner Brothers UK I was given the opportunity to interview the director of the DC Animated movie Justice League vs The Fatal Five, Sam Liu.

You can check out our full movie review here. The movie sees our heroes battle the Fatal Five, a time travelling group of villains on the hunt for Green Lantern Jessica Cruz.

Sam has a long history with DC animation as a story board artist, producer and director. Most recently having directed the very successful Death of Superman and the Reign of the Supermen which received a limited theatrical release back in January. Over the last 10 years if you have seen a DC animated movie there is every chance it was directed by Sam Liu. Some of my personal favorites include Suicide Squad Hell to Pay, Gotham by Gaslight and Batman Year one.

JS: Being a storyboard artist you obviously have a great eye for how the visuals should look. As the director did you have a vision in your head before you started production or does it come to you while your working with the voice actors?

SL: When your story boarding  your much closer and very much in the moment, but as a producer director you need a wider view of what’s happening. You need to see the whole field of what’s at play. I have to look at the big picture and then think about what are the little moments that make it up.

For me because of the schedule I look at the script first and try to identify what the broad picture is and what the whole adventure leads up to. A lot of times I will look at the end just to understand what our destination is and then I look back at the different pieces and how they are contributing to the journey.

Different people work in different ways but for me I first look at the script and I need to formulate where am I going to build and what direction am I going to go. That then translates to when i’m in the recording booth for how I need performances to be, whats the underlying story that’s happening, where do these characters need to go emotionally.

The different moments from within the story should always contribute to the final destination. Everything must serve the story, I get an idea in my head and one of the hardest parts of my job is I have to be very disciplined with the vision or the focus. Not saying there isn’t room to play with the actors or the story board artists but they need to serve a certain tone or accomplish the goal.

The story needs to start somewhere and finish somewhere, the tone and the emotions need to match that journey.

JS: How long is the entire process from getting the script to the movie being ready?

SL: There is 4-5 months of pre-production with the script, the actors, storyboards, design and colour then it goes overseas to the animators for another 4-5 months. In that time we don’t see it and just answer questions when needed. Then it comes back and we spend another few months with sound editing and re takes so the entire process lasts a little under a year.

JS: Is there a favorite scene or stand out moment that you completely loved the first time you saw it?

SL: There are a few, the immediate one is the Jessica Cruz angle. I worked very closely with the storyboard artist Cassandra Canete on the Jessica Cruz nightmare which is the trigger for her PTSD. Going into her therapy and then revealing she is actually a Green lantern. Then a scene with Wonder Woman giving her some tough love. I love the slow burn with the slow reveal this whole sequence felt very cinematic to me.

This was a very different story to the ones we normally tell and we see people through a different lens and it mixes it up which I find really interesting.

JS: This was the first animated feature outside of the Lego super hero girls to feature Jessica Cruz. Was your creative process bringing her to life different to say working on an established well known character like Superman or Batman?

SL: A lot of it is ‘How much is too much’ thankfully the trinity is already established but we have all these other stories and other characters like Mr Terrific, Miss Martian, Fatal Five and Starboy and they are all relatively new. Then of course Jessica Cruz who is arguably the centre of this story and the story is largely about her. The writing was very good because we spend enough time with her so you understand who she is as a person. Then we get her into the costume and it was done in a very delicate way because she is a hero but not a confident hero, she reluctantly gets into her costume. I think it was really smart writing and in tuned with what she was saying and who she is.

JS: Do you prefer working on an original story like this or adapting an existing story like the killing joke and Batman Year One and do you have a different creative approach?

SL: I prefer original stories or the liberty to make adjustments on an adaptation. I think the inherent differences of the mediums and how they are presented don’t make for the most impactful direct translations.

JS: If you could pick to direct any DC animated story what would it be and who would be your dream casting for the main character?

SL: My fandom of comics was during the 80s and 90s so pretty much all of the DC ones that I loved have been done already.

JS: Could you ever see yourself directing a live action Justice League movie?

SL: In theory, yes. But I don’t think they would ever ask me.

Flight or Speed That’s a hard one. Speed

Who is faster Superman or the flash Flash because that’s his thing!

All image courtesy of Warner Bros Entertainment and DC Comics