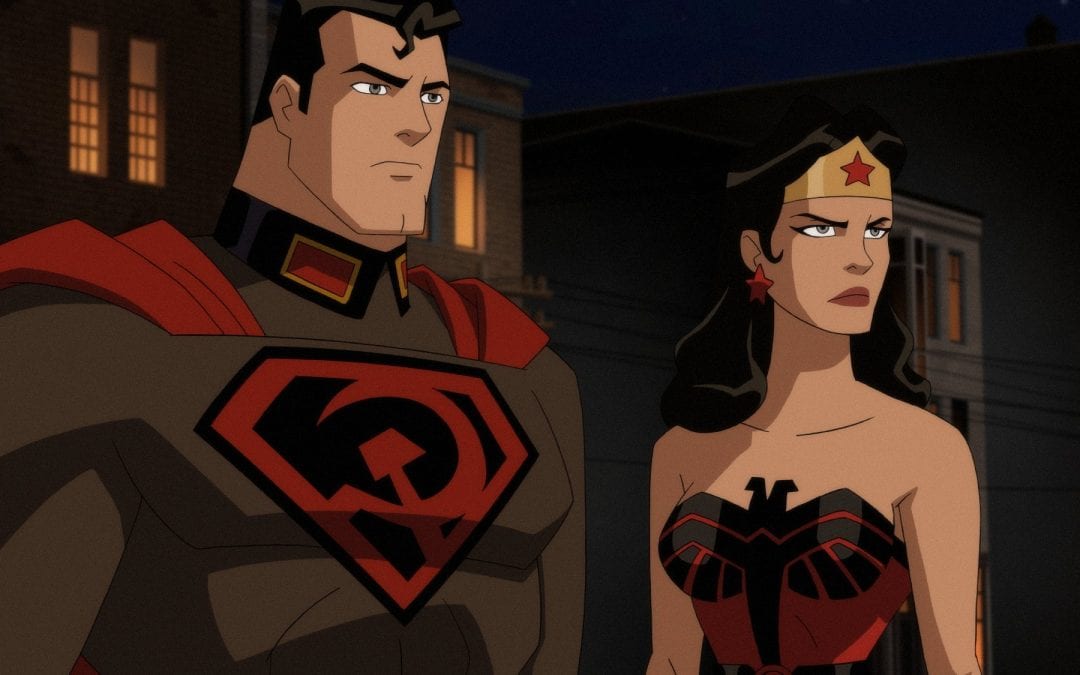 Once again at Dc World with thanks to Warner Bros UK I was  given the opportunity to interview director and producer of Superman Red Son, Sam Liu. This is the next animated movie adaptation from comic to screen.

I would also like to say thank you to James Stone for helping out with the questions, as James interviewed Sam Liu recently. 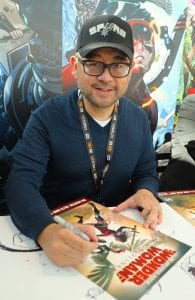 Claire Payne: Hello Sam, many thanks for taking the time to chat to myself on behalf of DC World. I recently had the chance to watch Superman Red Son and I am very impressed with the adaptation from page to screen.

CP: There is one spoiler that I would like to discuss with you. But first let’s talk about what history you have with the comic. We’re you a fan of the story before being involved with the movie?

SL: Well it’s embarrassing to say I had not read a comic in over two decades.  My time as a comic book fan was in the 80’s and 90’s, so I was aware of it but I had not read it, but I did get round to reading it read it before I did the movie.

CP: What were your biggest challenges when making the movie?

SL: Some of the challenges were similar to other movies, for example understanding of the story and the differences with the characters we know and their lives as it’s an elseworlds story. The challenge was understanding what the rules were. Superman landed in Russia instead of Kanas, so now he is a communist and a symbol of communism. So what does that mean? Things like that were probably the most challenging.

Then you have Wonder Woman, what does her role represent? How is she different? Which side is she on? and Batman he isn’t Bruce Wayne anymore so many things are thrown out of the window and this is a challenge.

When we work with structures that are not familiar to us we have to ask what is happening in the story? What are the conditions now? Psychologically what are they struggling against. 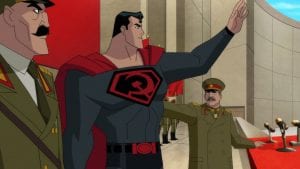 CP: I have only read Superman Red Son recently. One of the surprises that differs from the comic is that Superman kills Stalin, where in the book he dies from cyanide poisoning. Which I think is a fantastic different approach to  the character of Superman. Did that idea go back and forth before a decision was made?

SL: We all felt that made the most sense. I think in a comic book you have more time to tell the full story. Not only in this book but in other books as well, sometimes the chapters tell a story and it doesn’t necessarily connect to the next one. It just becomes a day in the life.

When you watch a movie it all kind of builds and connects together and certain things need to lead to the next. To me I felt like Superman killing Stalin was basically the….I will define this thing and I will do my own thing moment. Instead of a slow transition, we built it into the story and added depth to its meaning.

Sventlana was the purity of his youth, when he was a child and Superman needs to fight for the ideology of the country. Sventlana was the inspiration of that thought, so when she died it changes everything?

In Stalins interests he has to kill people, but we can’t do that because that’s not how the world works. So Superman disagrees with that but he is giving Stalin a chance, in the moment in his office Stalin is stood by the fireplace. But he doesn’t give in, so Superman is thinking okay I will have to do things differently, we can’t kill our own people in concentration camps. That is the moment Superman decides he is going to change the world now, in his way. The whole of the rest of the story Is Superman trying to do what he thinks is right. Hopefully the purity of the memory of Sventlana comes through. 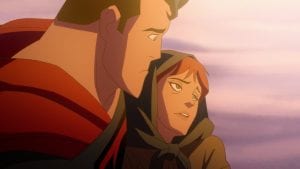 CP: Superman Red Son has been cast extremely well. How was it working with Jason Isaacs as the hero who has a reputation for playing the villain in most movies?

SL: When we have worked with Jason before he has always been really great. He is so versatile. Jason also played Lex for us on Gods and Monsters. Lex Luthor was a Steven Hawkins type character. Which was so different to what we were expecting but it was so good. In Red Son too, I remember in the preliminaries we were recording and doing a couple of run throughs to get the feel of his voice quality and how the accent would sound. He is very familiar with the different types of accents and the Russian dialect. It was interesting as they all don’t talk the same, in this part of Russia the syllables do change, its so interesting. It was actually something we had to English up a little bit, because of how the V and the W’s sound. An example is the word “varies” started sounding like “waries” (laughs). It started sounding a little comical and not very clear. So we find ourselves asking Jason just to change it and Jason is obviously great with his technique and what he contributes to the voice, it’s magical.

CP: Do you have a favourite moment from the movie and if so why?

SL: I am a sucker for good heart things. Sventlana, I loved her moments so much. I love the very beginning his relationship with Sventlana, it’s a little off script but her dying outside the mine concentration camp and seeing the sunset. We tried to make it so she can see the beauty of Russia verses the ugliness of Russia she was escaping. Coming to the surface, in my mind it was like a Moses leading the Israelites out of Egypt moment. Her dying it was supposed to be a beautiful showing of the beauty of Russia.

Sventlana believes in the purity of Superman. So that is one of my favourite personal moments.

CP: One of my favourite Elseworlds stories is Gotham By Gaslight, which you also directed and produced. Do you enjoy playing with elseworlds stories or do you prefer the original DC animated universe?

SL: I like the potent things when we see stories that are current or modern day stories. If they have actual meat on it like the Justice League verses The Fatal Five plot wise it’s okay but I really love the characters in it. I had a great time working on Justice League, Star Boy was a character I loved working on.

The editing process there was a lot removed and Bruce (Timm) would ask “is any of this any good?” And I would be like “plot wise, I don’t know to be honest.” Because there are lots of things that are problematic and I try to put people in the right places. I follow theses characters and it’s very fulfilling in that sense. Gotham by Gaslight was a lot of fun. With Elseworlds I immediately delve in and think it’s going to be fun to work on and hopefully enjoy it too.

It’s a different puzzle, sometimes the modern stuff is about what you know and it’s not necessarily interesting. Whilst the elseworlds stories you get a twist on the character or a different perspective.

CP: Can you tell us what you will be working on next?

SL: umm…I think Gary will get mad at me I tell (laughs)

SL: it will be a while, I am not doing the next few. Other people are working on the next movies, so my next one will be quite a while away.

CP: thank you so much once again for taking the time to talk to myself. We are all huge fans of yours Sam at Dc World and your work. We wish you great success with Superman Red Son. 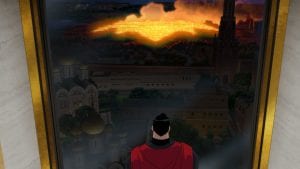 OWN IT ON DIGITAL DOWNLOAD NOW, AND BLU-RAY™ & DVD ON MARCH 16 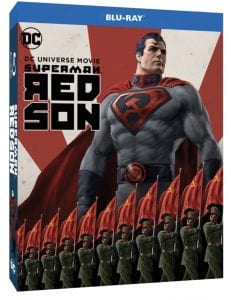 What if the Man of Steel was raised behind the Iron Curtain? So begins DC’s acclaimed Elseworlds story, Superman: Red Son, now the next entry in the popular series of DC Universe Movies. Produced by Warner Bros. Animation and DC, the feature-length animated film arrives – along with a new DC Showcase animated short, Phantom Stranger – from Warner Bros. Home Entertainment on Digital Download from February 25, 2020
on March 16, 2020.
Based on DC’s famed Elseworlds tale from 2003, Superman: Red Son takes place in an alternate reality where the spaceship bearing the last survivor of Krypton crash lands – not in rural Kansas, but in Stalinist Russia. Can this Cold War-era Earth survive the coming of a Soviet Superman?
Golden Globe-nominated actor Jason Isaacs leads a stellar cast as the voice of the alternate, Soviet take on Superman. Isaacs, one of the stars of the Harry Potter film franchise, Star Trek: Discovery and more than 120 films and television series, gets his turn as a Super Hero after three memorable appearances in DC Universe Movies as famous Super-Villains from the DC library. Isaacs previously voiced Sinestro in Green Lantern: Emerald Knights, Lex Luthor in Justice League: Gods and Monsters and Ra’s al Ghul in Batman: Under the Red Hood.

• DC Showcase: Phantom Stranger (Animated Short) – Animation legend Bruce Timm helms Phantom Stranger as both executive producer & director from a script written by Ernie Altbacker (Teen Titans: The Judas Contract). Set in the 1970s, the short follows young adult Jess as she joins her friends at a party in a dilapidated mansion hosted by the mysterious Seth … when odd things begin to happen to Jess and her friends, can Phantom Stranger intervene? Peter Serafinowicz (The Tick) gives voice to Phantom Stranger, and Michael Rosenbaum (Smallville, Impastor) provides the voice of Seth. Phantom Stranger also features the voices of Natalie Lander, Grey Griffin and Roger Craig Smith.
• Cold Red War (New Featurette) – An exploration of the Cold War through the lens of the Elseworlds classic Superman: Red Son, as Superman rises to power and tension escalates between the United States and the Soviet Union.
• Two episodes from Superman: Red Son – The Motion Comics.

ABOUT DC
DC is one of the largest English-language publishers of comics and graphic novels in the world and home to some of the
most iconic and recognizable characters ever created. As a creative unit of WarnerMedia, DC is charged with
strategically integrating its stories and characters across film, television, consumer products, home entertainment,
interactive games and the DC Universe subscription streaming service. For more information visit dccomics.com

SUPERMAN and all related characters and elements are trademarks of and © DC. © 2019 Warner Bros. Entertainment Inc.

About Warner Bros. Animation
Warner Bros. Animation (WBA) is one of the leading producers of animation in the entertainment industry, producing and developing projects for multiple platforms, both domestically and internationally. WBA’s current series include Animaniacs for Hulu, Green Eggs and Ham for Netflix, Gremlins: Secrets of the Mogwai, Jellystone, Little Ellen and Looney Tunes Cartoons for HBO Max, Harley Quinn and Young Justice: Outsiders for DC UNIVERSE, DC Super Hero Girls, Teen Titans Go!, ThunderCats Roar and Unikitty! for Cartoon Network, Bunnicula, Dorothy and the Wizard of Oz, New Looney Tunes, Scooby-Doo! and Guess Who?, The Tom and Jerry Show, Wacky Races and Yabba- Dabba Dinosaurs! for Boomerang, and Mike Tyson Mysteries for Adult Swim. WBA’s full-length theatrical film, Teen Titans GO! to the Movies, was released in summer 2018. As home to the iconic animated characters from the DC, Hanna- Barbera, MGM and Looney Tunes libraries, WBA also produces highly successful animated films — including the DC Universe Movies — for DVD, Blu-ray® and digital media. One of the most-honored animation studios in history, WBA in animation).