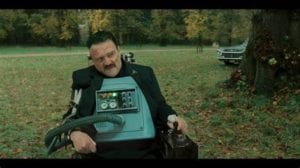 The team (Alfred, Thomas, Lucius, and Dave Boy) escape the Fortress with the help of Mr. P. But he didn’t do it out of the goodness of his own heart. After the talk with Alfred about the grief he put Mrs. P in and how much she would want to see him again. So out of guilt he helps them to escape with Stormcloud. Well, what they thought was Stormcloud anyway.

As the League is celebrating, Troy burst in. The Stormcloud capsule falls and breaks leaving everyone bewildered whey they find themselves still alive. They have been played as Salt has already planted the chemical bomb in London. When Alfred get the news, he figures it out that Mr. P was keeping something more from him and Mrs. P. With Mrs. P’s stern look, Mr. P tells Alfred and Dave Boy where it is. 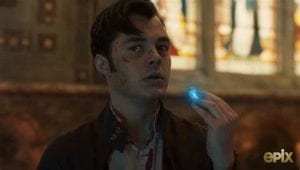 After Dave Boy and Alfred arrive where Stormcloud really is, Troy and Lucius join them to help diffuse the bomb. As they try to the countdown begins. Troy decides he’s going to be the one to swallow the capsule containing the chemical substance to prevent it from spreading. At first, it doesn’t seem to effect him. But as the coroner is about to take him away something happens.

Frances is in charge of the Raven Union. They attack London calling it the last surge. When the attack call goes out, Martha Wayne goes into labor. They are parents to a bouncing baby…girl! (Some sources on the web wonder if the story is continuing based on the Lincoln March storyline from the Court of Owls New 52 comics). 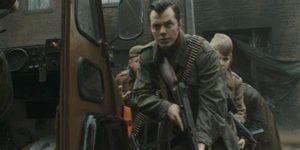 Bet now fights on the League side. Alfred is a colonel. And Troy has become a biochemical weapon in a suit.

WHAT HAPPENED IN THE SIX MONTHS?? Guess Season 3 will answer that question.