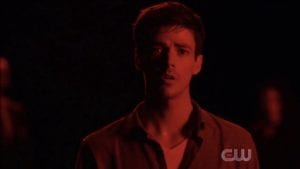 The Crisis is inching closer and closer during these two episodes. When Part One starts, it is two days before the Crisis. Two days before Barry is to die. And the thoughts of leaving everyone looms heavy in Barry’s mind. But a solution seems to come to him that could save his life. Although, it could destroy his humanity. 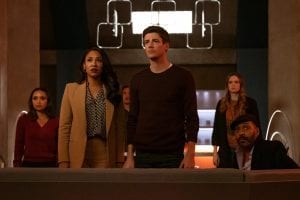 Barry’s Temptation
The team have a battle with Ramsey at the top of the episode in Part One. Elongated Man gets hit with some of Ramsey’s blood and absorbs it. When they get to STAR Labs, Ralph starts to go into shock and then the team starts to loose him. To save him, Barry gives him some of his blood to so he can use his rapid healing. But during the transfusion, Ramsey’s blood gets into Barry’s blood and his mind. 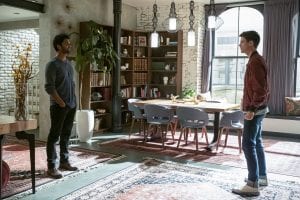 Later that day, Ramsey starts to take over Barry’s mind. At first it is thought to be a dream, but then it turns out be a mind game. Ramsey not only knows Barry as The Flash, but he also knows his about the Crisis and his true feelings. Ramsey dangles a proposition for Barry. If he joins him, he would not be only saving his life but he would live forever.
It is hard to say whether Barry takes his offer or if he fought against it before Ramsey took over. It is something, in my opinion, for the viewers to decide. The Flash becomes Dark Flash. And they terrorize Central City. Turning everyone into a zombie. And Ramsey starts calling himself Bloodwork.
Team Flash eventually catch Bloodwork. Putting him in the same containment as Chester from the first episode of the season. Then the Crisis arrives.