After 12 preceding episodes of such quality, the season finale of Stargirl certainly had a lot to live up to. Based on the sure handed way that the show runners have navigated their way through the first season, it felt almost written in the stars that this was going to be good. Having watched the finale in its entirety, I can safely say that it was good, very good indeed. Wrapping up the story arc in a satisfying way and also pointing towards the direction for next season, this was a very enjoyable slice of comic book television.

Action is very much the order of the day here, and the show once again provides some excellent fight choreography. Despite it’s light tone and optimistic nature, there have been some hard hitting fight scenes on offer this season and here was no exception. With our heroes and villains facing off in the scrap to end all scraps, lives are taken and beatings are issued free of charge. A nice mixture of cgi and hand to hand combat, coupled with highly effective camera work, the sense of stakes is palpable. Some truly memorable characters meet their end and will not be returning in season 2. As to their identities, well you’ll just have to watch the show for yourself and see….. 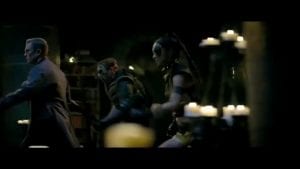 Every cent in the budget has certainly made it to the screen, with a villainous device straight out of a James Bond film taking centre stage right from the off. I do hope that the move to the CW for season 2 doesn’t rob this show of everything that makes it a cut above the Arrowverse shows, but the proof is in the pudding. The creative team must remain in place, continuing their good work. What has been particularly good has been the well rounded villainous characters. Despite their insanity and evil nature, the likes of Icicle and Brainwave have been provided with sufficient motivation and layers to give them real depth. Whilst we as an audience can’t wait to see them get their just desserts, there is more to them that helps to elicit just a hint of sympathy, which is always an important facet to good screen villains. Yes Jordan Mahkent is criminally insane, but there is a tragedy to him that makes the audience empathise ever so slightly with him.

As always, these reviews don’t go overboard with spoilers, but it’s safe to say that there are plenty of pointers towards potential paths for next year. With two new villains teased (a shady character and somebody guaranteed to eclipse the rest), a character thought dead for many years seemingly back once more, a member of the JSA maybe taking her first steps along a darker path and maybe, just maybe, more members of The Seven Soldiers of Victory appearing in the future, there is so much to look forward to.

This has been an excellent debut season, and I honestly struggle to think of a comic book based show that was this good consistently during their first season. Easily accessible yet full of deep cuts that are designed to ignite the fire of the most devoted fans, the tone has been pitch perfect. The stars have aligned superbly to give us fully realised, comic book accurate characters, lifted straight from the page of Stars and S.T.R.I.P.E. The casting has been spot on, with a potent mix of youth and older characters getting the blend just right. Family friendly with a hint of something darker beneath it, bravo to all involved. same time next year?