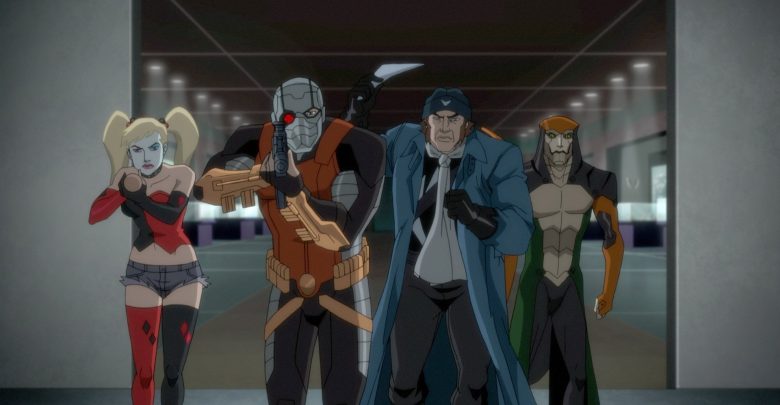 Freshly released this week, Suicide Squad – Hell To Pay is the 31st release in DC Comics Animated Original Movies series and the 10th release of the shared continuity Animated Universe. Directed by Sam Liu, with Alan Burnett on script duties. Featuring an all star voice cast including Christian Slater as Deadshot, Vanessa Williams as Amanda Waller, Liam McIntyre as Captain Boomerang and C.Thomas Howell as Eobard Thawne, this animated film delivers on all fronts! 86 minutes of action, violence, comedy and so many DC Universe characters to enjoy in big small doses, this film really does have something for everyone! Rated 15, it is easily the most adult film in the series thus far. DC certainly doesn’tskimp on the gore in this one, with even a liberal helping of nudity along the way. Certainly not one to watch with the kids, but for mature fans of the DC Universe, this is a must see!

Opening with a pre credits scene that is part James Bond, part Robert Rodriguez, this action packed prologue, set 3 years in the past, establishes Waller as the ruthless government puppet master behind Task Force X, that thinks nothing of killing her minions to suit her own agenda. It is a quite breathtaking few minutes, featuring cameos from DCTV favourites Tobias Whale, Vertigo and many others.

On we then go into the present day, where the action gets even more intense! Waller puts together a new Squad, consisting of Deadshot, Harley Quinn, Captain Boomerang, Killer Frost, Copperhead and Bronze Tiger, tasked with taking possession of a mystical playing card, one that enables the owner to escape Hell upon death, and take an undeserved place in heaven. From there, the breakneck pace never lets up, as our antiheroes undertake a road trip that takes them to male strip clubs, The Tower of Fate, Penthouse apartments and Vandal Savage’s lair! Needless to say, each location is the setting for a shoot out of immense quality and bloodiness, and true to form with the Squad, not many of them make it to the end of the film alive. Each death is more spectacular than the previous one, as the gore level increases exponentially.

The plot evolves to show that Task Force X are not the only party that are chasing the card, as Vandal Savage recruits Professor Pyg against his will to perform surgery so grotesque that only a depraved butcher like Pyg could be up to the task. For a slightly convoluted reason, the immortal Savage wants the card to be to ensure he doesn’t end up stuck in hell following several millennia of his evil life. This is the only sticking point of the film for me, as an immortal character that essentially cannot die should not be afraid of death. When questioned, Savage infers that the rise of the metahuman in the preceding 10 years has seen him take more physical damage in that time than all the thousands of years combined. It seems a bit trite, but nevertheless when the nature of Pyg’s surgery on Savage is revealed, then the Squad are seemingly then in a situation that they can never hope to get through.

The final act of the film is, for me, where it really earns all the plaudits. The notorious Reverse Flash, Eobard Thawne himself, enters the fray with his own designs on the card. Without wishing to give away why he wants it for himself, the reason involves his fate at the hands of Thomas Wayne’s Batman in The Flashpoint Paradox movie, which helps to show that the film is connected to the shared animated universe, as footage from the film itself is shown. It’s quite superbly done, and set up a surprisingly emotional final few minutes.

Overall, this film is a real treat for any DC fan, as it contains so many characters to enjoy, from major players to blink and you’ll miss them cameos. The action is brilliantly animated, the voice acting is spot on, and the story is fun with a capital F. As usual with these Blu Ray releases, there is a wealth of great bonus features on the disc; a nice mixture of featurettes and bonus episodes from previous DC animated TV series.

Verdict – Not for kids, adults only stuff. The Squad are all backstabbers, out for themselves. A very true portrayal of these characters.