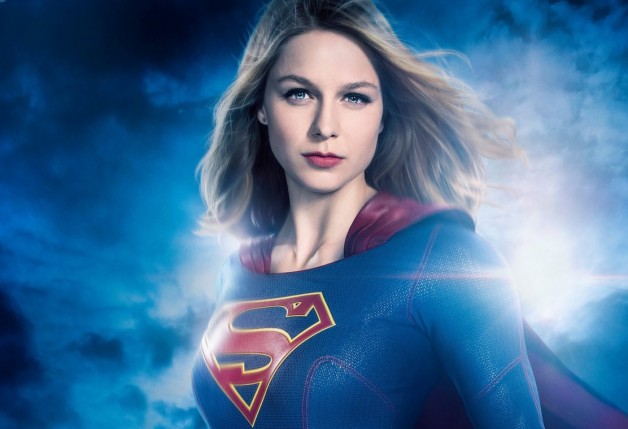 I’ve got two words for you, IDENTITY CRISIS. Supergirl premiered its third season with a powerful, very quotable first episode as well as a new Supergirl title treatment. Supergeeks rejoice!

Millions of viewers tuned in to see The Girl of Steel struggle with her identity and try to overcome heartbreak while being National City’s favourite superhero.

How about that (literally) dreamy opening sequence where we got a glimpse into a ‘perfect world’ for Kara Danvers. From sharing a moment with Mon-El (the lover she sent away at the end of Season 2. Ouch.), to embracing her mother. Talk about an opening to hit you right in the feels. Don’t lie, you cried too.

Well, it wasn’t all sunshine and roses. Dreamland was short-lived as the opening scene quickly cut to Supergirl hovering above the high-rise buildings of National City and listening in for any trouble she could dive right into. Trouble didn’t take long to find. Maggie Sawyer and Alex Danvers were right in the thick of a high-speed car chase with a semi-trailer and bad guy, Robert DuBois, whom they identify later on in the episode. You could feel the Sanvers fandom lose its breathe for a good few seconds as an insane (but very cool), large gun blaster was ready to fire at them. Supergirl to the rescue, of course. You can breathe again Sanvers fans. Breathe.

Back at the DEO, the crew are reunited and Supergirl means business. With no time to waste and no time for small talk (I’m looking at you Winn). You can sense her detachment from a mile away, especially after blowing off her own sister’s tasting for the wedding reception. How good was that dig from J’onn, “Come on Alex, your unrelenting seriousness is one of your best qualities”. Ouch. But we still love you Alex.

In this first episode of the season, we are introduced to Morgan Edge (Adrian Pasdar). The new bad guy of National City disguised as a hot-shot real estate mogul. Edge is on a mission to drive out the low-middle-income residents from the waterfront area, where the Supergirl statue is unveiled, and replace it with overpriced high rises. Typical bad guy thing to do. We’re onto you, Edge. Lena Luthor on the other hand is always ready for a challenge, putting Edge on blast in front of the city’s leaders. The award for most quotable bad-ass dialogue goes to Lena Luthor in this episode. Power to the strong female that she is. Slay girl.

It’s not long before Supergirl is back at it again chasing all the trouble she can. Clearly distracting herself as she tries to forget that devastating Season 2 finale. Is anybody really over it? I’m not. Kicking ass and saving the city post-breakup. Sigh. If only we could all deal with breakups this way.

Soon after they identified Robert DuBois, a mercenary by the codename Bloodsport, Supergirl was back in action. Tracking down Bloodsport at a secret building guarded by military personnel. Well, not that guarded considering by the time she flew there, the guards had been knocked out. Inside the building she has a choice to take down Bloodsport, who jumps out of a Daxamite Ship, or attend to an injured guard. Of course she chooses the guard. There’s our Kara.

James interrupts her by signalling the emergency beeper. Bad idea James. When Kara zooms over to CatCo to confront James, the conversation ends with Kara quitting CatCo and leaving her reporting life behind. Real smooth move James.

Meanwhile, the DEO has discovered that Bloodsport has stolen some serious equipment to cloak any vehicle (a submarine let’s say) so it can send a nuke right into the heart of National City. If you put two and two together, you’ll realise that Bloodsport is obviously working with new baddie Morgan Edge. But we could smell that evil duo brewing from a mile away.

Let’s talk Danvers sisters. Alex and Kara share an intense, unforgettable scene in Kara’s apartment. Alex storms in to tell Kara the ‘pity party’ is over and she needs to get her true self back in the game. This is actually quite an intense scene for the pair and I give props to the writers for the beautiful dialogue exchanged between the two. Kara has clearly bottled up all “human” feelings regarding the loss of Mon-El, all the while struggling with whom her true identity is. Words were thrown around like “I’m not human” and “Kara Danvers was a mistake”. Then we all died a little inside.

Alex makes a quick switch to business mode as she briefs Kara on Bloodsport. Telling her to be there at the unveiling of her own statue. Before leaving Alex hit us right in the feels with “Kara Danvers is my favourite person. She saved me more times than Supergirl ever could. So just think about that while you’re trying to get rid of her.” Did I mention we all died a little inside?

If Alex trying to get through to Kara wasn’t enough, J’onn also tried his luck with a little one-on-one at the waterfront unveiling reminding Kara that she also has a human heart which is essential to part of her identity. Reality check Kara. Get it together GF!

At the waterfront, during patrol, Maggie and Alex discuss their wedding over comms. Alex explains her hesitation to tie the knot with Maggie, and her reasoning is just the sweetest thing. The absence of Alex’s dad is giving her cold feet and making her second guess plans for a big wedding. Of course Maggie has some words to say and damn were they some sweet words. The Sanvers fandom (myself included) goes into meltdown. Actually, any scene with Alex and Maggie sends me into meltdown. Yes, guilty.

We are briefly introduced to a new character by the name Samantha (played by Supergirl newcomer Odette Annable). Samantha’s character will be important as we discovered she possesses some sort of super strength, saving her daughter from being trapped underneath a heavy steel girder. At first she’s introduced as a normal human, but I’m excited for the rest of the season assuming she transitions into the villain Reign.

Lena Luthor had some nice words to say about Supergirl after the unveiling of the statue. This was soon interrupted by an explosion rocking the waterfront. Bloodsport was back at it again, this time attacking from underwater in an invisible submarine. VERY COOL. But also not cool. Supergirl finds his heartbeat and plunges into the deep water (knowing very well she can’t breathe underwater). Where is Aquaman when you need him!

As another missile is fired from the submarine, Supergirl is knocked back by the blast and she drifts unconsciously underwater. But not for long. The sound of Mon-El’s voice brings Kara back to life and before you know it she submerges from the water, lifting a whole submarine above her head. Yes, Queen.

Supergirl warns Morgan Edge that all her attention is on him, before leaving him scared and abandoned on a container ship in the middle of the ocean. But that won’t be the last we see of him.

An alien ship activates underwater. Curious to see who or what is in the ship.

Alex asks J’onn to walk her down the aisle because she sees him as a father figure. I’m not crying, you are.

Finally, an ending I won’t forget because it terrified the hell out of me! We return to the opening dream sequence with Kara’s mother. Except this time, she turns around and her face turns into something from your worst nightmare and then some. Samantha also wakes up in a panic, ending the first episode of a promising new season.

What are your thoughts on the Season 3 premiere? Did episode 1 hit all the right notes for you?