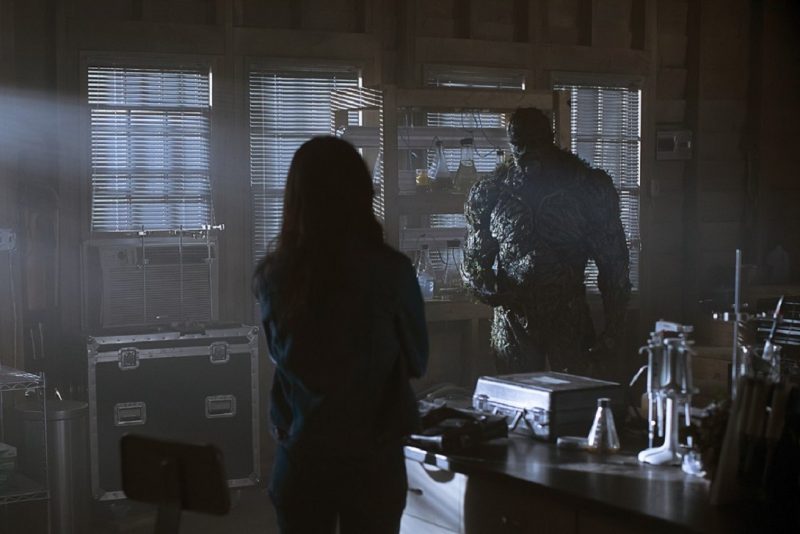 This week gave us something of a creeper episode, as The Price You Pay provided plenty of enhancement to the plot of the season, despite featuring the least amount of action. It was the kind of episode that upped the ante for certain characters in terms of their motivations and filling in some much needed blanks. And, above all things, we almost got our first proper taste of Blue Devil. Whilst it must be a certainty that the last four episodes will grant that particular wish, this week was a big tease writ large. At one point Daniel Cassidy (played by Ian Ziering), was so close to going full on Devil we could almost taste it, only for a well placed tranquilliser dart to spoil our fun.

Picking up from where we left off last week, with Cassidy comatose in the hospital following the crowbar/back of head interface courtesy of Avery Sunderland’s goons. Flashbacks reveal intriguing tidbits regarding the nature of Cassidy’s deal. The other party involved? The Phantom Stranger, this time depicted in a costume slightly more reminiscent of his comic book iteration, but still lacking the white hair and tall stature. This really does throw several things up in the air. Is The Stranger a benevolent force for good, or something more sinister? Was Cassidy always destined to become the Blue Devil, or is it an unfortunate side effect of Dr Woodrue’s serum? And what does Cassidy have to do with Abby Arcane in accordance with The Stranger’s masterplan? Let’s see how it unfurls. Ian Ziering gave an interesting and full on performance, reminiscent of Nic Cage in Ghost Rider, all bug eyed and manic. As previously mentioned, we didn’t quite get the Blue Devil, but we did get a throwback to the comic book costume amidst the film set flashback. Just give it to us already!

Is there a more odious character on television than Avery Sunderland? Will Patton has infused the character with the perfect cocktail of sleaze, charm and stone cold menace. Utterly watchable yet repellent, the character is a real highlight of the show. Just when you think he can stoop no lower, he pulls it off. Without venturing into full on spoiler territory, his misdeeds this week involve threatening his surrogate daughter Abby with grave repercussions if she “crosses the line with him”. You bet your bottom dollar that, despite his affection for Abby, he would have zero qualms about taking her out should she make his life difficult.

Revelations are also forthcoming about Avery’s involvement with the murder of Alec Holland, in addition to the triggerman’s identity and also their motivation for doing so. A truly tangled web involving police corruption and illicit liaisons, with Sunderland playing the part of the puppetmaster, devil and manipulator. There cannot be a happy ending for the Cable family when all this plays out to its conclusion. Although one does wonder if there will be any happy endings to go round once episode ten swings around.

Speaking of unhappy endings, a special mention must go to Kevin Durand this week for his ever watchable turn as Dr Jason Woodrue. The man seems to be barely keeping a grip on his sanity, as his hubris and desire to save his wife are being replaced by desperation and madness. Durand is utterly convincing as the bonkers scientist, filling the screen with a mad-eyed prescence. Usually cast as a man of action, it’s great to see such a talented actor spread his wings and play against type. Whilst informed comic book readers will know that Woodrue’s existence takes a “floronic” turn for the worst, it remains to be seen whether we will get to see that before the show wraps up.

Our titular character got two standout moments this week, which served as bookends for the episode. Hunted down at the start of the episode by Avery’s bounty hunters, he uses his powers to send wooden spikes into his would be pursuers. Painful in the extreme, it was a hell of a visual effect, leaving one hunter’s face looking like a pincushion. Whilst almost out of character for Swamp Thing, they did have it coming! It also helped to show how powerful the creature is, with a full gamut of extraordinary powers.

The end of the episode gave us a tender moment between the creature and Abby (strangely, Crystal Reed was a peripheral figure this week), as another hitherto untapped power enabled Abby to see him as Alec once more. Will this lead to a spot of nookie, or something more profound? If you know your Alan Moore, then you will know that a hallucinogenic tuber or two might be in her diet moving forward, enabling her to see The Green as he does and work on the same level as Holland.

All in all, this was another top drawer episode in a show full of them. Much like Titans and Doom Patrol, the show works for all viewers new to the characters, but rewards long time devotees with deep cuts and Easter eggs galore. As we approach the conclusion of the show with each passing week, there is a tangible sense of events starting to come together. This is a testament to the skill of the writing team, as they straddle the worlds of horror, mystery and suspense, whilst staying true to the comic book source material. Roll on next week, for an episode intriguingly titled “Brilliant Disguise”…