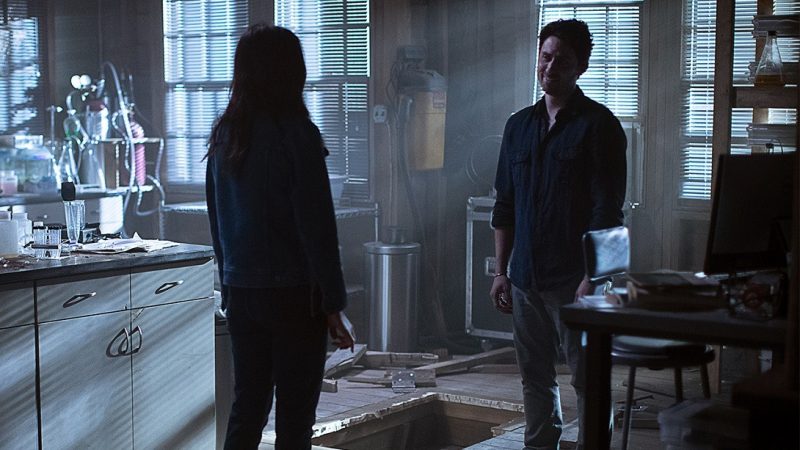 Revelations, duplicity and double crosses. The main ingredients for this latest foray into the mysterious town of Marais. A dialogue heavy episode that eschewed the usual big helping of paranormal spookiness in favour of some real human drama. With a huge paradigm shift that changed the dynamic of the relationship between Avery and Maria Sunderland, the title of the episode seems very apt, as it certainly did feel as though a disguise had been lifted by Marais, casting off one persona for another. The relationship between Holland and Abby also took a strange twist, as did the inter-family bond between the Cable brood. If that were not enough, the Woodrue marriage also got its time onscreen, in a heartbreaking manner.

Starting with the Holland/Arcane pairing, last week ended with Swampy unveiling a power that enabled Abby to see him in his former form, giving Andy Bean some enhanced screen time. The bond between the two was touching but with a huge side helping of sadness. Despite the brief happiness they enjoy, both are all too aware of what lies beneath this illusion, this disguise. Helping to provide exposition to the audience regarding the the impending clash between The Rot and The Green, a true sense of impending doom is starting to gather. Indeed, the sight of Holland/Swamp Thing slumped on the dock, telling Abby to let him go, never look back and leave him to embrace his role as part of the The Green is a striking visual. With just three episodes left to go, it is time for Swamp Thing to take action, rather than skulking around the bushes, pining for Abby and a life that is now gone. The Bean/Reed chemistry has been believable and real, but now is the time for action, with screen time running out.

The meat on the bone this week came in the aforementioned shift in power at casa Sunderland. The previously put upon Maria emerged as a shrewd, ruthless operator, pushed to breaking point by Avery’s duplicity and underhand operations. The poor woman has been through the mill this season, not only courtesy of her husband rinsing through the family fortune and having his way with Lucilia on the side, but let’s not forget her dead daughter tried to kill her too! In a real take charge moment, the women in Avery’s life conspired in secret to take him out. This felt like a move that wasn’t signposted and came as a genuine surprise to me. The performances of Virginia Madsen and Jennifer Beals were excellent, as two opposed women with no love lost between them, yet working together to remove a common enemy. Although, like the best bad pennies, Avery isn’t done just yet.

Maria’s deft dealing with the head of The Conclave, Nathan Ellery (played by Michael Beech, previously seen as Jesse “Father of Black Manta” Kane in Aquaman) sealed her rise to the top of the tree. A combination of delicious homemade pecan pie and salesmanship has seen full funding given to Woodrue’s research. It will be interesting to see if the character starts to take a darker turn from here or remain a fundamentally decent, yet troubled person. Also troubled is Dr Woodrue, with his wife’s deteriorating mental state highlighted again this week. Based on his comic book destiny, is he going to somehow take a quantum leap in the next three weeks? Kevin Durand has portrayed him as a devious, arrogant character, yet that is tempered with the sympathy generated by his wife’s plight.

That is also something of an issue for the overall show, as there is going to be a hell of a lot to cram into the last three episodes without it feeling half-done and not rounded off. For a show that isn’t going to come back, each week is now going to have to move at an enhanced pace. There needs to be some kind of titanic face-off between Swamp Thing and a big adversary. Could that turn out to be Woodrue, or even Avery? The Daniel Cassidy story line needs to come to a satisfactory ending too, giving us the full on Blue Devil experience and wrapping up The Phantom Stranger’s plans for him. But, for a show that has delivered the goods consistently, I have faith that all roads will lead to a proper conclusion. Either way, we are all in some captivating television, starting next week with what sounds like an Avery-centric episode titled “Long Walk Home”…