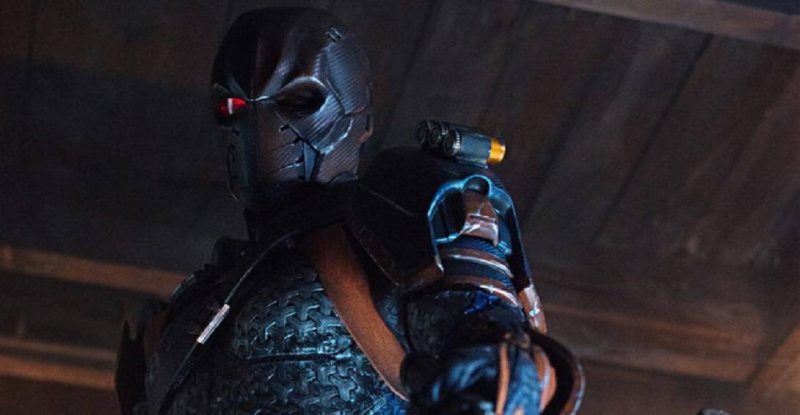 Following on from the events of episode 4, which were firmly rooted in the events of the past, this week saw the timeline reverting to the present day. After the abduction of Jason Todd at the hands of Slade Wilson, the sins of the past have come home to roost in a big way. Maybe after a week or two of the plot being almost in neutral in terms of its progression (despite gripping performances and expert storytelling), this week was all about moving forward with a vengeance. With Slade’s motivation for wanting the Titans gone made very clear, we got to see his plan in execution. An episode that highlighted the character in all his deadly glory, “Deathstroke” truly was an episode that did not skimp on the action, providing evidence yet again that Titans does fight choreography on an elite level.

The pace this week was notably quicker, as our heroes frantically try to recover Jason. Curran Walters was given a lot more to do than in recent weeks, proving that his casting was spot on. Despite the desperate situation that he was in, the character never dropped his level of bravado and profanity, except when the realisation set in that he might not survive his ordeal. His interplay with Esai Morales’ Slade was a testament to the great writing on offer from Bianca Sams. One character methodical, monosyllabic and in control of every situation, the other barely keeping it together.

Morales is the quintessential Deathstroke, a perfect storm of menace, violence and quiet malevolence. Despite spending the entirety of the episode behind his mask, his performance truly came through the camera and commanded attention. As the season progresses, it should be a treat to see the different layers of the character come to the fore, such as his relationship with his children, his code of honour and his ruthlessness in combat. Speaking of combat, we were all treated to an example of Wilson’s unrivalled prowess in a fight. No spoilers here, but the last fight between Dick, Kory and Slade was a tour de force in close quarter encounters. Whilst it was great to see Dick displaying the kind of skills befitting a student of the Dark Knight, he was truly outmatched by Slade. It will be truly intriguing to see how the team eventually defeat him. I can only imagine there will be casualties along the way.

A special mention must go to Michael Mosley and his portrayal of Dr Light. After what was seemingly his final appearance, it is worth commenting on just how spot on his performances have been. Truly encapsulating the character’s sadistic, amoral nature, the devilish rotter that was a key figure in the classic Identity Crisis run of 2004 has been made flesh by Mosley’s interpretation. Oozing a repellent air, he has been a welcome secondary villain and will be much missed.

I am also convinced that we haven’t seen the last of Trigon following on from his blink and you’ll miss it part in the first episode of the season. As Rachel struggles to contain her dark side to such an extent that Rose only avoided death at her hands due to her healing factor, I feel it is only a matter of time before dear old dad sticks his head above the parapet one more time. I hope so at least, as the character deserves more than he got in terms of screen time.

So, how about that cliffhanger of an ending? If not yet seen, I urge all readers to make the time to see it immediately. Is this the DC Universe version of A Death In The Family? Is there a twist in the tail? Is Kory about to tap into her flight abilities, which have yet to be realised onscreen? Mostly, why wasn’t Bruce notified about Jason’s predicament? His intervention could have saved a lot of anguish and one would imagine that Batman would know if Robin was in a tight spot he would be there, with a foolproof plan to boot. Next week cannot come quickly enough, we need to know, DC!

With the next episode finally giving us an entry into the show for Superboy, the world of Titans is set to gt bigger and richer. A potent mix of action, drama and heartache with a liberal helping of adult language, the show has been a slam dunk since week one. Getting better and better each week, it is the perfect fit for both long time devotees and a new, modern audience. May it continue telling these complex, layered stories for many more seasons to come.