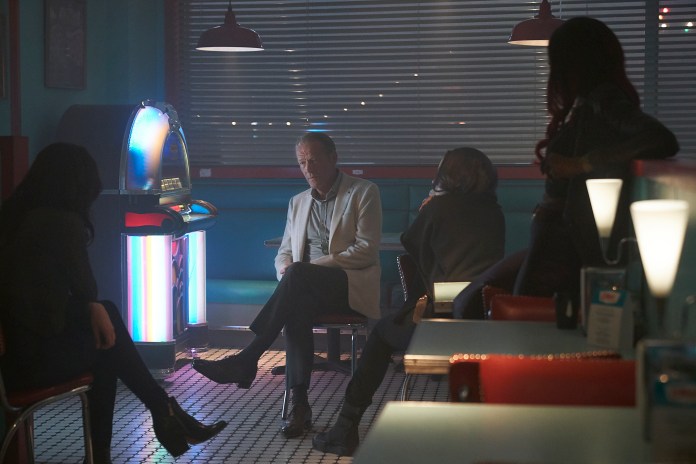 Bruce Wayne is back! The magnificent Iain Glen reentered the fray to unite the Titans and bring Dick back from the brink. Easily the best thing about the episode, his interpretation of the character has been somewhat divisive, but here such quibbles should be firmly banished. The most interesting thing is that he appears as both the abstract Bruce from Dick’s tortured psyche, but also as the real character, interacting with the disparate female members of the team at the mysterious Elko Diner. Showcasing Glen’s range, we were treated to some excellent scenes, both in the real world and the dream world. What’s more, the hand to hand fighting prowess of Mr Wayne was finally given a demonstration, albeit in one of Dick’s tortured fantasies. Despite his advanced years, the effortless, economical manner in which he kept Dick at bay was classic Batman, with added Batarangs to boot!

With those dreamlike states serving to enable Dick to realise that Jericho’s demise isn’t quite as final as he thought (like he was ever going to be dead), the reinvigoration of Dick was now begun. Seizing the moment and escaping his literal and metaphorical prison, the inevitable confrontation with Slade is back on the table. How his newfound fugitive status gets resolved still remains to be seen, but at least Dick is back on track and more importantly, back on the road to Nightwing..

The genius mind of Bruce Wayne is given a platform by the way in which he elaborately gathers Donna, Kory, Rachel and Dawn together at the aforementioned Elko Diner. Whilst suspension of disbelief is required to fully accept the different methods he employs for each of them, it is quite effective as an example of Batman’s sleight of hand methods. Did anybody notice the musical cue that accompanied his entrance into the diner? Whilst quite subliminal, there were certainly echoes of Danny Elfman’s iconic score in there, re-purposed to suit the entrance of such a titanic character.

It was very good to see Jason and Rose get some enhanced screen time this week, as the two characters have been underserved in recent weeks. Their relationship is pretty believable, as two lost souls that find comfort in each other. Both bear the scars of their pasts and putting them together makes perfect sense in the context of the show, with them both needing the other to provide comfort and empathy. Curran Walters in particular deserves a lot of credit for his performance, as he put out a more vulnerable less cocksure side to Jason Todd. Behind the bravado and arrogance, this is a boy that has had a tough life and still deals with it each and every day.

The revelation that Rose has been secretly in cahoots with her father all this time wasn’t a major shock, (I called it in a previous episode review). The fact that she renounces said act does give hope that we will see her suit up as Ravager for the upcoming smackdown, helping to put her dear old dad down.

Lastly, one wonders what Cadmus Labs are up to with their experimentation on Gar? The pretty graphic brain surgery on him at the start of the episode was like something out of a Hannibal Lector film, as it would appear that Mercy Graves is trying to weaponize him in some form. With Conner still back in stasis at Cadmus too, it does feel as though this organisation will end up being the main adversary for the team in season 3. As the storyline with Slade reaches its end, then there is certainly mileage in Cadmus moving forwards. It could even be the case that Lex Luthor makes his presence felt too.

With just a couple of weeks left now until the season ends, the expertly constructed story is now coming to a close. With the promise of action galore and the mother of all team ups to come, all we can do is strap ourselves in and enjoy the ride. Same time next week? You bet!….