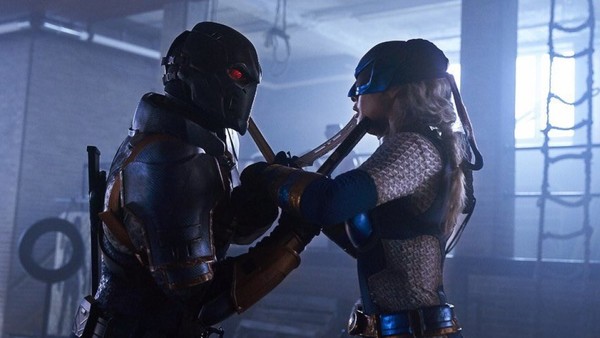 This penultimate episode of Titans was extremely effective as a table setter for the season finale. It started to bring together the disparate elements of the titular team, scattered to the four winds as they are. The predominant focus of the episode centred around the journeys of Dick and Hank, as both were beginning their recoveries from very different rock bottoms. In a very clever mirroring method, both men were getting (re)acquainted with superhero costumes old and new, as Hawk and Nightwing (yes, finally), began to rise.

Starting with Hank/Hawk, who had fallen into a very dark space since we last glimpsed him. Back on drugs and cage fighting for money to fund his habit, the once proud Titan was going through hard time indeed. Alan Ritchson demonstrated his range in this episode, showing the damaged, vulnerable man beneath the facade. An uncomfortably disastrous encounter with a willing groupie, coupled with the revelation that he sold his Hawk suit for a mere $200 to fund his next score helped to give Hank a moment of clarity familiar to addicts seeking recovery. Despite his mistakes and misdemeanours, this is a very likeable and sympathetic character that deserves a path to redemption. 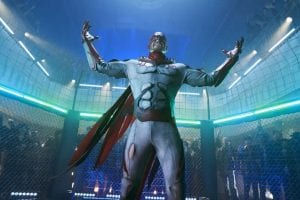 So, to Dick. The fans of the show have been waiting for Dick to become Nightwing almost since the first episode, and that wait is now (almost) over. The road to get there has been long and at times, laborious, but always involving and rewarding. After a visit with Jericho’s mother, Adeline, the fugitive Dick had his focus and conviction restored. Cue a trip to Stu’s Handmade Shoes and an awkward encounter with the proprietor, Stu. Providing some genuine comedic touches, poor Stu was not impressed with Dick’s decision to burn the Robin suit, made with loving care by Stu and his team of super suit technicians. The performance of Currie Graham as Stu was a welcome bit of levity for a show that sometimes lacks it. His distaste for Dick’s behaviour gave off an almost Bond/Q dynamic which was a lot of fun.

We saw the suit! Kind of! Typically, Bruce Wayne had called ahead to Stu and commissioned a new suit for Dick. All we got was a tantalising glimpse of it, so the full glory is saved for next week. Promotional pictures of Brenton Thwaites in the suit look superb, very comic book accurate and sure to appease fanboys the world over. 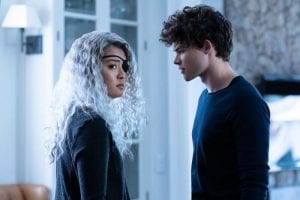 After the thinly-veiled revelation that Rose had been in cahoots with her Father all this time, the remaining time of this episode was devoted to filling in the blanks of her backstory. I found this to be highly effective storytelling, as the complex relationship of Rose and Slade was explored. The performances of Esai Morales and Chelsea Zhang were excellent. Zhang was utterly convincing as a girl that wants her Dad’s love, attention and validation. Morales hit his usual high standard too, giving Slade a layer of ambiguity. Does he love his daughter and want her to be a part of his life, or does he see her as an asset to be used in his war with the Titans? Either way, the breakdown of their working relationship should be the catalyst for some interesting questions of loyalty when the long awaited final smackdown come to pass.

Speaking of which, the teaser trailer for next week’s season finale has whetted all our appetites for something very spectacular to happen, along with the potential demise of a key character. Watch it below and let’s reconvene next week to talk about it…