Barry has his speed back and some additional powers to go with them. The ability to speed think. Barry can now think different probabilities and scenarios in his head before Cisco can get a single word out. But with his speed thinking comes a price. He starts to loose his emotional side. 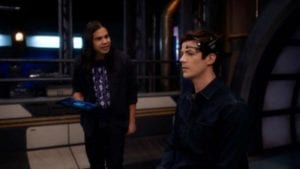 As time passes, it is clear to see Barry’s soft side is disappearing. He doesn’t help Frost in a fight with Mirror Master. And the only scenario he sees is leaving Kamilla and Singh in the mirrorverse and only rescuing Iris. Not because Iris is his wife. But because she has more intel on Eva and she can help Barry to defeat her. 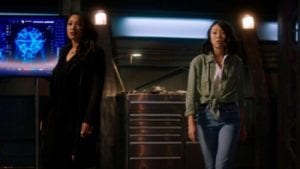 When Barry uses Cisco’s Atlantean-made portal device to get Iris out, she refuses to go without Kamilla and Singh. She knows something is wrong when Barry says no to bringing them back. Iris is eventually sucked out of the mirrorverse by Barry. She falls ill shortly after she goes through the portal. Barry doesn’t know what to do and he can’t ask the team for help because he knocked them out when they tried to reverse his effects of the artificial speedforce. In his frustration of seeing Iris hurt and feeling helpless to save her, he destroys the artificial speedforce.

There may be hope for one more Wells. It seems there is one that hasn’t been thought of: the original Harrison Wells. The Harrison Wells before Eobard Thawne took his body.

Next episode of The Flash is this Tuesday, March 16th.