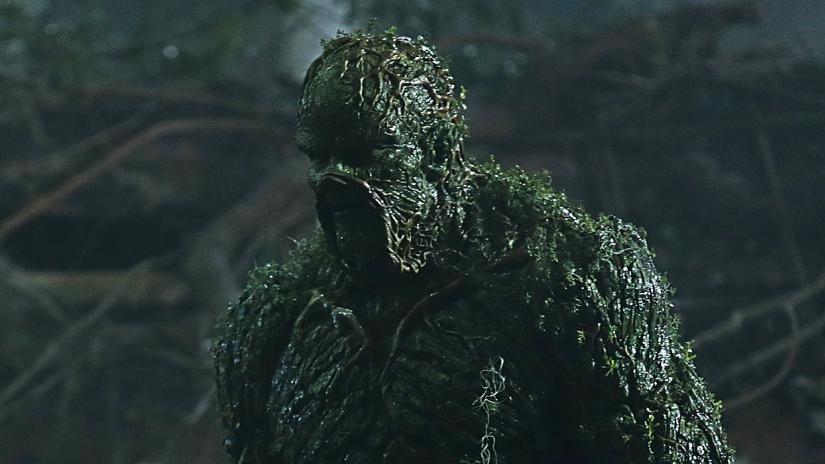 This latest helping of Swamp-based antics served as a showcase for the talents of Will Patton. It certainly was a long walk home in every way for Avery Sunderland, following on from his attempted murder at the hands of the Cable clan last week. We got a tour de force acting performance from Patton, as Avery goes through the gauntlet, shot and bleeding, suffering haunting hallucinations. The swamp is effectively messing with his mind, punishing him for his sins. Patton’s sense of terror is palpable, thoroughly convincing as a man truly on the edge. Stripped of his usual oily sophistication, this is a man at the end of his rope. The visions of Lucilia sprouting vines from her mouth and nose were a particularly grim highlight in a season full of them.

A spotlight is also thrown on his past and experiences with the swamp. He has seen some truly horrific things. His father, extolling the virtues of the “A man takes what he wants” ethos – is burned alive in an extended, gruesome moment as vines lock onto him, and drag him into the fire. A truly hideous experience for the young Avery, it gives a sense of what shapes the man. Does he hate the swamp for taking his father and want to punish it? Or, was he happy to be rid of him and wants to tap into that mystical power for his own gain.

His exchanges with both Swamp Thing and Dr Woodrue also were highlights of the episode. With Woodrue, the switch in dynamic between the two men is plain to see. Where once Sunderland was pulling all the strings, using his role as benefactor to keep Woodrue on his chosen path, now he is no longer in that place. Emboldened by the backing of The Conclave, Woodrue is being moved to an upmarket, state of the art facility to continue his work, with a dedicated goon squad in place to track and capture Swamp Thing. Kevin Durand here gives the character a bigger presence, with his ego starting to run wild. I personally can’t wait to see his involvement in the last two episodes to come, with the feeling his avarice will prove his downfall.

The Sunderland/Swamp exchanges are interesting. Whilst still caring enough to help heal Sunderland’s wounds, the barely concealed disdain for the man is all too apparent, without knowledge of Sunderland’s involvement in his “death”! He is aware, however, of his abuse of the swamp and pledges to put it right. Although, a combination of Sunderland, Woodrue, the aforementioned goon squad and a liberal helping of nitrogen puts the freeze on his plans, setting up a sticky situation for the next two weeks.

Abby’s arc took her back to her day job at the CDC, away from Marais and back in Atlanta. This lead to a welcome cameo from Arienne Barbeau, a veteran of the 1982 Swamp Thing movie, as Abby’s boss Dr. Palomar. Paying tribute to the legacy of that cult classic film, her short screen time as a ball buster in the pocket of The Conclave was an interesting one, taking Abby to task for her erratic behaviour. Probably a glorified plot device, it was a nice bit of fan service all the same. With Abby’s dear friend Harlan suffering at the hands of The Conclave’s hired muscle, it is time for action. What further revelations are about to drop could be something very enticing indeed, with all kinds of possibilities to explore.

All the pieces are being put into place now, expect action, horror and a bit of a body count over the next two weeks. Hopefully there is enough time left to give the show a proper and satisfying conclusion, tying up all the relevant plot threads into something that pleases the audience. With so much ground left to cover and several characters left with a lot of their journeys still to take in a narrative sense, I am a little concerned. But, where there’s life there is hope. Considering the show has managed to consistently deliver the goods each week, I have faith that they will pull it off. Anything less will be a tragic waste of a quite brilliant slice of television.