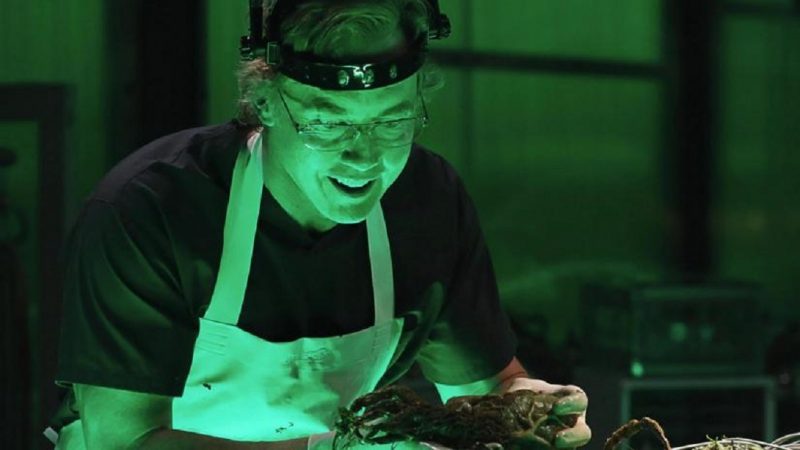 The clue was very much in the title this week, as The Anatomy Lesson brought a classic slice of the comic books to the television screen. Giving us the truth about Swamp Thing’s existence and the ultimate fate of Alec Holland, so much classic material was crammed into the 45 minute running time. As if that were not enough, we finally were treated to the much anticipated first appearance of Blue Devil, in a sequence so tense and shocking, it made the wait well worth it. With a fresh twist on the Sunderland marriage also thrown in for good measure, it certainly feels as though the final (ever) episode of this series will have a lot of interesting ground to cover in order to provide a satisfying ending. But that’s next week, let’s focus on this week’s offering.

Picking up from last week, with our titular hero finding himself in a real spot of bother, transported to a lab for a gruesome dissection. Drawing heavily from the wonderful Alan Moore source material of the 1980’s, the viewer is given all the details regarding Swamp Thing’s existence. As the increasingly ego-maniacal Dr Woodrue puts it, the creature is a plant that thinks it’s a man. Not Holland transformed, but a purely plant-based creature that has absorbed the deceased Holland’s essence and memories, creating a humanoid form to the best of its ability. Not for the faint of heart, the dissection includes the removal of the creature’s heart and lungs without harming it, proving them to be merely props for this “muck encrusted mockery of a man”. Plaudits must go to Derek Mears for his performance on the operating table, his delivery of the line “I feel every everything” was truly heartbreaking, drawing sympathy from the viewer for this wretched creature. Indeed, the final scene of the episode lays it on even more, outlining to Abby and Swamp Thing that Holland is gone and the creature is a vessel for his memories. Very striking stuff, directed with nuance and pathos by Goi.

Props to Kevin Durand too, for another layered performance as Dr Jason Woodrue. His ego has started to take over, his greed for discovery has superseded his need to put his ailing wife first. This avarice comes back to haunt him with his neglected wife’s fate, almost as a vicious circle. His need to find a cure for her condition overrides his need to care for her, leaving him at the mercy of his own ambition. Durand has been excellent throughout the series, giving the character plenty of depth. With just one episode left to go, it remains to be seen if he will undergo his destined “Floronic” changes or not. It would be a good move to make, giving Swamp Thing a physical adversary for his final bow.

So, we FINALLY got the first real appearance of Blue Devil. Teased a couple of weeks ago, Daniel Cassidy finally made the transition into his demonic alter ego. And boy, was it something! After a welcome cameo from Macon Blair’s Phantom Stranger, Cassidy was given a glimpse into a dark possible future. Driven by his need to protect Abby and Liz, the transformation took place. A fearsome and downright scary creature, much darker than the comic book version, the ease with which he massacres a room of The Conclave’s finest mercs truly shows his awesome power. Despite being somewhat kept to the shadows, enough glimpses are shown to really showcase his unstoppable nature. With a power set that almost apes Ghost Rider’s penance stare, it is well worth a watch. Hopefully there will be one more serving of the Blue Devil next week, it would be quite something to see him working in tandem with Swamp Thing.

It wouldn’t be an episode of Swamp Thing without Avery Sunderland doing something dastardly, with this week involving the sectioning of the long suffering Maria. For a woman that has ran the gauntlet of highs and (mostly) lows, it is a terrible would be ending for the character. It would be nice closure for the series to have Avery get his just deserts by any means necessary, based on the number of terrible things he has done. Will Patton has done a masterful job of making the character both odious and intriguing at the same time. The only way for the show to end would be for him to suffer in a big way.

With just one episode left, it remains to be seen how the series will end. A lot of ground has been covered, but it does sometimes feel that there is a lot more to go. A victim of it’s own shortened run and cancellation, what has made it to screen has been spectacular. A show of this quality deserves to go out on a high. The final episode is titled Loose Ends, so let’s all hope that none are left open.