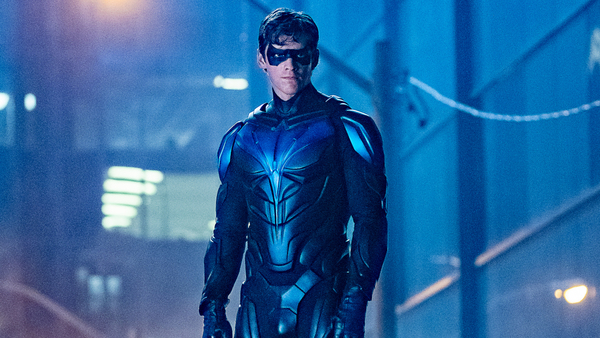 The season finale of Titans was, overall, a highly enjoyable viewing experience. Whilst it did tick a hell of a lot of boxes, it was found slightly wanting in others, but I found these to be relatively minor quibbles in the grand scheme of things. The season has generally been excellent in both its execution and choices, introducing flagship characters such as Bruce Wayne and Deathstroke into the mix to great effect and providing a huge amount of crowd pleasing moments. The one question mark I had going into this season finale was whether the show’s creative team had spread affairs too thin, with too many disparate threads to bring together in a satisfying way. Did they manage to pull off bringing events together? Yes (and slightly no).

This action packed season finale had it’s plot teed up nicely by the events of last week with a rejuvenated Dick Grayson embracing the Nightwing persona and facing off with a rampant Slade Wilson. It was quite the thrill to see the first ever live action Nightwing fight sequence, filled to the brim with all the flicks, tricks and somersaults one would expect from the character. Finally utilising the famous eskrima clubs, with added electricity for added value, showcased why Brenton Thwaites has been the perfect casting for the character. His poise and fighting style is spot on for the character and physically he looks the part too. My only complaint regarding this final face off was that it was just too brief. Whilst Slade has been established as the ultimate badass all season long, his demise (I believe he will be back) was all too easy, struck down by the tag team of Dick and Rose. It was a somewhat ignominious ending for the character and one I am not a fan of. Esai Morales has proven to be the definitive Slade Wilson, a masterful piece of casting that deserves a return to the fray down the line. 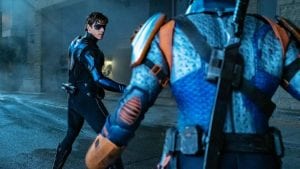 With that particular villain put to bed, our titular heroes found themselves reunited and off to sample all the fun of the fair, confronting Gar and Conner, controlled by the nefarious Mercy Graves and Cadmus Labs. It was highly satisfying to see all the members of the team getting into the thick of the action, highlighting the fact that they are stronger together than apart, with each of them bringing something to the table. The ensuing confrontation was full of enjoyable bits of business, such as Donna and Conner going head to head and the wonderful scene between Dick and Conner in a Smallville cornfield courtesy of  some trickery by Rachel. As Conner breaks free of his mind control and takes to the skies, it would have been simply perfect to get a brief snippet of John Williams’ iconic score. Part of me was expecting to see a certain red caped being waiting to greet him in the sky, but hope springs eternal that we will get some kind of Man of Steel sighting in season 3.

So, to the most divisive moment of the whole episode, if not the whole season, in the form of Donna’s demise. It was something of a mystery to me that such a high powered being, able to literally take Conner’s best punch to the face moments earlier like it was nothing at all, would meet her maker courtesy of a jolt of electricity. Slightly inconsistent storytelling, almost as if the writers were trying their best to shoehorn in a sacrificial lamb. And please don’t get me started on why Conner wasn’t getting himself under the fallen tower to save the day? Accepting events on face value, it did seem to not quite sit right. It is inevitable though, that Donna will make her back to the land of the living at some point, based on Rachel’s trip with the body back to Themyscira on Amazon Airways……. 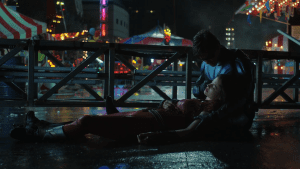 With the season finale wrapping events up in a loosely tied bow, aided with yet another gravitas laden cameo from Iain Glen, the team appears to be in a good place moving forward, but there are an abundance of questions to be answered as time progresses. Dick is still an escaped fugitive, so how does he avoid another dose of hard time? If Bruce is being honest about having zero involvement in bringing the female members of the team together at the Elko Diner, then who was that posing as him? With the arrival of new villain Blackfire, will Kory take more of a starring role in season 3, having been largely marginalised this time around. Finally, with his pseudo-son having the time of his life in Titans Tower, will Lex Luthor step from the shadows and become a physical presence on the show, rather than a persistent telephone user?

This season has been, on the whole, massively enjoyable. With some minor tightening of structure, pacing and tone, season 3 can be even better. Everybody involved with the show deserves a pat on the back for delivering something that appeals to the most ardent of DC Comics fans, steeped in the lore, but with enough accessibility to bring more casual enthusiasts to the party too. With season 3 set to debut some time in 2020, there is room to set the bar higher than before for sure, but make no mistake, the name on that current highest setting is Titans…..